Baptist Union of Victoria > Book Reviews > A Faith of Our Own

A Faith of Our Own 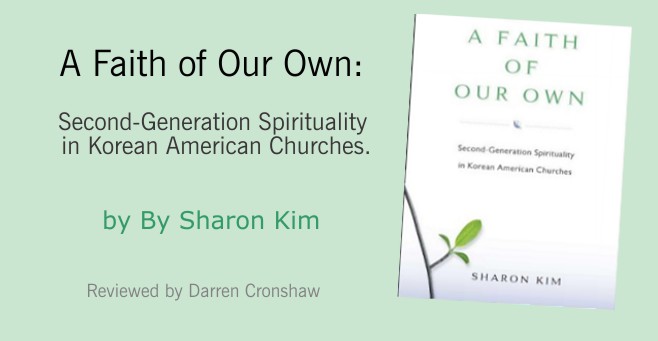 Sharon Kim is a sociologist of religion who investigated the dynamics of second-generation Korean American churches in Los Angeles. This is her own world (she is married to the Senior Pastor of Garden Christian Fellowship in Chatsworth). But she gathered a broad base of data from 22 churches over 10 years (1996-2006), using participant-observation, literature review, surveys and interviews. Two churches started in the 1980s, 15 in the 1990s and 5 after 2000.Ten are nondenominational and the others range from Southern Baptist to Presbyterian. Seven numbered less than 100 members, 9 had 100-200 members, 5 had 200-500 members and 1 had 3000+. The research is an insightful analysis of an innovative new grouping of churches that are mushrooming in number. Moreover, it has broader helpfulness with implications for culturally diverse ministry in other contexts.

The churches evolved out of cultural and generational tensions. Sociologically, immigrant churches have functioned as social service agencies, a context for language and cultural maintenance, social hubs and organisations that confer social status for volunteer leaders (compensating for their often downward mobility). They often attracted converts because of their “non-religious” social and community value. However, the second-generation have different needs and wanted worship that fitted their world including English language. They wanted leadership that empowered them rather than treating them as second-class citizens or immature children and transparent approaches to decision-making (and not always deferring only to men over 50). They were also disappointed with what they perceived as dysfunctional and hypocritical political infighting. Starting their own churches has meant greater degrees of ownership and autonomy, as Pastor Kang of Voyage Christian Fellowship explains: “We are really spoiled, spiritually and in other ways … unless we go on our own, we’ll never learn … it’s like having thirty-five year-old stay at home with … parents who provide everything.” (p.39).

They were attracted instead by a “community of comfort” where they can receive spiritual enrichment in a context they feel their unique selves are understood and affirmed. Second generation as children of immigrants and racial minorities have shared values, usually related to Confucian ideals such as respect for parents, work ethic, family-centredness and emphasis on education, or at least the shared experience of feeling those pressures, and the shared desire for more expressive communication and unconditional affirmation. One member said “you can just let your guards down and be yourself” (p.72). Starting distinct second generation congregations for Korean Americans seems to be unique among immigrant communities, but it may be a model for other cultural groups.

Literature on second-generation migrants has often portrayed them as “between two cultures”, as they navigate how much to retain of their parent’s culture and how much to assimilate. Lifestage modelling of migrant churches shows they often experience inevitable decline as the second generation leave (either leaving immigrant churches for mainstream evangelical churches, or leaving faith altogether). But Kim explains some second-generation Korean Americans are innovatively creating their own new path – constructing “spiritual laboratories” or hybrid churches drawing form what they feel is the best of Korean and Western forms of church:

“In fashioning a faith of their own, they yearn to emulate the strengths and avoid the weaknesses of both American evangelicals and Korean immigrant Protestants. From American evangelicals, they have adopted organizational structures and worship styles, while rejecting their individualism. In respect to Korean immigrant churches, the second-generation leaders want to preserve tongsongkido (unison prayer) and embrace their parents’ emphasis on the collective over the individual. Finally, the second-generation leaders desire to break away from the materialism and status preoccupation that they observe in both mainstream evangelical and immigrant churches. Within their hybrid third spaces, they are selectively embracing cultural tools from various sources in order to invent distinct second-generation spirituality. They want their own voices to be nurtured and heard.” (p.166)

My curiosity was aroused as to what ways other churches can learn from the best of East and West?

I especially appreciated Kim’s analysis of how the churches are reclaiming community. Confucian society stresses the collective over the individual. Western influence means people often do what is good for them first, without thinking of the community. One minister bemoaned: “Whenever a person leaves the church for a better job or school, they leave a vacuum in our community that negatively impacts us. I don’t think they see this.” (p.95) Second generation churches want to challenge their members to continue to think about “how will this affect us?” Another minister started his church with a sermon, “The Declaration of Interdependence” in order to instil a body theology informed by Asian values from the beginning. He expanded this idea:

“There are some elements that dominate Eastern thinking as opposed to Western thinking. One of them is collective verses individual identity. Asian cultures tend to be much more bound by corporate identity encapsulated in the fact that in our culture, the family name comes first before your individual name. I read scripture a certain way. I always had a gnawing feeling that the hyper-individualized interpretation of scripture was wrong. There is something lacking in mainstream evangelical faith. The people were not growing in the Lord in a healthy way if it’s just about me and Jesus.” (p.99)

Moreover, they do not want to be religious ethnic enclaves, but are eager to engage in outreach with social service and politics. In the aftermath of the 1992 LA riots that ransacked Korean businesses, it was second generation Korean pastors who responded most vocally with advocacy for improved ethnic relationships.

Many are also eager to shift their ethnic boundaries and welcome other Asian groups and all Americans. Some have a focused vision for second generation Koreans, convinced homogeneity is the best path to growth. Others are expanding to intentionally welcome other Asians (and have been successful in this). Still others have a multi-ethnic vision (but are yet to broaden beyond their own Asian boundaries). For example, Pastor Choi of Fruitful Church said, “When we first planted this church ten years ago, we were hoping to develop an Asian American church. Now that we are fully Asian American, I realize that this should not be our final destination. We need to stretch our boundaries further and become truly multiracial.” (p.146)

America, like Australia, is a nation with a large proportion of people who are immigrants and children of immigrants. In Australia it is almost half. With the advent of affordable air travel and high speed communication, immigrants do not need to sever ties to their homeland to the same extent as previous generations. They are more likely, Kim suggests, to seek a hybrid identity rather than assimilate to their new adopted country, and more likely to want to construct their own unique and autonomous expressions of church. A Faith of Their Own is a detailed scholarly account of how this is unfolding in LA’s mushrooming number of American Korean Churches, and so highly recommended reading for anyone interested in culturally diverse ministries. I am eager to ask leaders in my tribe of churches whether lessons from LA’s mushrooming American Korean Churches and A Faith of Their Own have lessons for us in our culturally diverse context. The volume is also an excellent example of ethnographic research and congregational studies for sociology or practical theology scholars and research students.