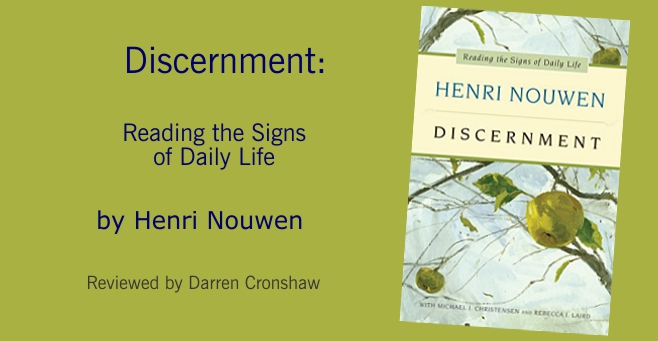 Discernment is a key practice for a missional people. As believers we query where and how God is calling us to serve. As churches we also seek to understand who we are and what contribution we can make.

Henri Nouwen (1932-1996) counseled many people throughout his 40 years of ministry. He was a groundbreaking Catholic priest and cherished writer. His wisdom on discernment has not been collated until now. He taught that Jesus’ story is our story, and that we, like Jesus, are God’s beloved. Instead of listening to the voices of our false self and its illusions or compulsions, he urges us to see through appearances to our innermost self.

Nouwen’s own discernment is the illustrative story throughout the book. Much of his early ministry was as an academic at Notre Dame, Yale and Harvard. But he wondered if his career was getting in the way of his vocation. His teaching and speaking helped him to feel influential, admired, and indispensable. His students were the best and brightest, the aspiring leaders of tomorrow. But he wondered if he could “recover from terminal academia” and ground himself in ministry in a more local community, especially among the poor and marginalized. Inspired by Jean Vanier, he was called to pastor Daybreak’s L’Arche community in Canada, a group of disabled people and their assistants. He served in that “hidden” context for ten years, and learned afresh that God loves and accepts us irrespective of what we do and achieve. L’Arche community was a context that gave Nouwen the opportunity to practice what he teached, and teach by example as well as words.

Discernment explores Nouwen’s teaching that God speaks in different ways, and that discernment is the gift and practice to access and understand how God is active in and around us. The first part of this book looks at the nature of discernment and distinguishing truth from falsehood. This may lead in unexpected directions, as he quotes Henry David Thoreau:

“Why should we be in such a desperate haste to succeed, and in such desperate enterprises? If a man does not keep pace with his companions, perhaps it is because he hears a different drummer. Let him keep step to the music which he hears, however measured or far away.”

Being attentive to that different drum takes solitude as well as listening to our community, but is worthwhile for the new perspective it offers.

The second part discusses the process of seeking guidance and reading subtle signs in books, the nature we enjoy, the people we encounter, and the events we experience. A consistent theme is Nouwen’s valuing of his community – including trusted mentors such as Thomas Merton, the living and departed saints he drew inspiration from, the gospel writers that taught him afresh about Jesus (following Augustine’s advice to “Listen to the gospel as if Jesus was present”), and those who taught him to learn from creation especially indigenous people. Nouwen underlines the importance of people who have helped his discernment, but also how important it was for him to learn to be present and bless people in his community. At L’Arche, he said, people were not impressed with his lectures and books, but that he would show up and show love.

The third part is about discerning vocation, the presence of God, identity and timing. I especially appreciated two aspects in these chapters. Nouwen narrates how part of his vocational discernment was a year in Peru. He had long felt called to the poor of Latin America, and wanted to learn not just Spanish but the treasure of “the language of the peasant”, citing Abba Arsenius. It was in this context and learning in community from the likes of Gustavo Gutierrez that Nouwen realised his spirituality had become elitist and individualistic, shaped by North American preoccupation with developing the interior life. He learned spirituality should not be just introspective for the sake of inner harmony, but active and reflective and part of the struggle of God’s people. But in the end Nouwen felt called to learn from and speak for rather than live among the poor. He did not feel he had been given the grace to live there long-term with the costs and realism of being able to live among the poor. This honest description is recommended reading for anyone considering serving in a cross-cultural context. Nevertheless, Nouwen’s South American community urged him towards a spirituality of peacemaking and advocacy, and it was useful preparation and part of the process for discerning his call to serve people at Daybreak as their pastor.

The other gold in this last section is Nouwen’s wisdom about timing. It is a discernment issue to know when to act, when to wait, and when to be led. At times our calling demands we act courageously. But sometimes we cannot act. Often we have to wait patiently for a promise that is yet to be fulfilled and be attentive to the present moment. There are circumstances in which we have to hand ourselves over to others to be led. After a life of ministry and action, Jesus was handed over for the Passion (Mark 14:10; Romans 4:25). Things were then done to him without any control on his part. It is like people with disabilities, debilitating illness, or age-related immobility (cf. John 21:18). This relates back to identity. Nouwen has a high view of a person as made in the image of God. He has a passion for communicating God’s love for everyone, including the poor, wounded and sick. Success, popularity and power are not prerequisites for being special: “Whether we do anything worthwhile, prove anything important, or give anything of value, God still loves us unconditionally” (Kindle locn. 1987). This is powerful good news for the disabled, frail, ill and older. Discernment and vocation is lived out in passion (and things done to you), as well as action.

Henri Nouwen’s Discernment, like the previous two books of the trilogy Spiritual Direction (2006) and Spiritual Formation (2010), is a posthumous publication, drawing on original journals and other writings and compiled by Michael Christensen and Rebecca Laird. It includes insightful explanatory appendices and exercises for journaling or small group discussion, so would be a useful resource for Lent or Advent. It is not a step-by-step guidance manual, but a deeply thoughtful and honest reflection from one of the twentieth-century’s most widely respected guides on discernment and being attentive to God in everyday life.