Baptist Union of Victoria > Book Reviews > The Quest for the Trinity:

The Quest for the Trinity: 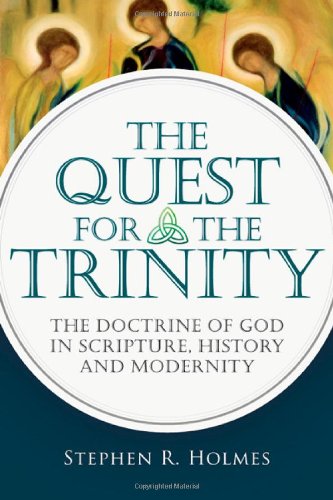 The Quest for the Trinity makes plain again that Steve Holmes is among the most erudite and trustworthy theologians working today. His acquaintance with the tradition’s own wrestlings to articulate its speech about God, and its nuances and real game-shifting moves, is extraordinary, and his ability to communicate these in an accessible, albeit at times dense and somewhat dry, 200-page account is nothing short of remarkable.

The book has an encyclopaedic and ecumenical character about it. Holmes writes with a disciplined handle on the primary literature, its various nuances and theo-historical location, and is conversant with, but not distracted by, much recent secondary literature. His treatments on Irenaeus, Origen, Basil, Gregory of Nazianzus, Hilary of Poitiers, Augustine, Aquinas, Hegel, Schleiermacher and Dorner, in particular, as well as of the various anti-trinitarian movements between the sixteenth and eighteenth centuries, are exceedingly helpful and clearly laid out.

Holmes is concerned to defend the thesis that apart from some relatively minor disagreement and development, the doctrine of the Trinity was basically settled by ecumenical consensus in the fourth century, enjoyed ‘essential stability’ until the eighteenth century, and has been the accepted position of the church, with no significant modification, until the modern period and its various ‘recoveries’. Holmes believes that rather than representing a genuine recovery of a lost doctrine, however, the modern ‘trinitarian revival’ represents a departure, misunderstanding, and misappropriation of the received tradition, sometimes in the name of underwriting some social, political, or ecclesial programme. He builds a strong case, and those who believe particularly that unambiguous continuity with traditional articulations of doctrine central to the faith remains an indispensable feature of doing theology responsibly today will find much here to bolster that claim.

Of course, there are additional ways to tell the story of faith’s efforts to think and speak about God – ways which are no less responsible to revelation, which are not necessarily at odds with the articulations offered by the Fathers but which offer some different ways of expressing such claims, and which remind us that we might be better to acknowledge a greater plurality of expressions within the one tradition.

Whether Holmes holds that such different accents represent voices too insignificant to hear, or too far removed from settled orthodoxy, or whether it is due to editorial concerns, he chooses not to engage with modern contextual (including feminist) accounts of the Trinity, or with the work of Christian mystics such as Hildegard of Bingen, John of the Cross, and Julian of Norwich, or with some other ways that faith has sought to ‘speak’ of the Triune God: for instance, ways that some visual artists and poets and musicians have taken. Here, the catholic and innovative work of Sarah Coakley is to be much welcomed (for it represents both a fruit of the tradition that Holmes is keen to guard as well exhibiting something that is actually demanded by it), along with that of J. S. Bach, William Blake, Dorothy Sayers, and Marlene Scholz.

These niggles aside, The Quest for the Trinity is an extraordinary and timely achievement, and no reader – even those who may finally remain not entirely convinced of Holmes’ thesis vis-à-vis modern accounts and retellings of the tradition – could fail to learn much here, and to be challenged again about what it means, and about how, to speak of Father, Son and Spirit, and of the ‘persons’ of the Trinity. Such a challenge is most urgent, particularly for those of us whose task it is to preach the gospel, and it may be most timely for those of us who have looked primarily to the likes of Rahner, Zizioulas, Pannenberg, Moltmann, Gunton, Jenson, Volf, and/or Plantinga to interpret the history, and articulate the meaning, of the doctrine for us. On those parts of the tradition given attention by Holmes, pastors, teachers, and students alike will find here a reliable and fruitful guide, and, for some of us, a challenge to rethink what we may have been taught about the apparent gulf that exists between Latin and Greek doctrines of the Trinity, and about accounts that have painted the Fathers to be working at some odds with the authors of the Bible. Indeed, if Holmes’ thesis is anywhere near correct, then most of what passes for ‘trinitarian theology’ today will have to be re-thought.