As it nears its 150th anniversary, the Baptist church in West Melbourne has been re-potted in a new apartment complex.

In the 1860s, when North and West Melbourne were growth suburbs of the city of Melbourne, a large, island allotment bordered by King, Hawke, Curzon and Miller Streets became the base for the Baptists. Those planting the new West Melbourne Baptist Church put up the original bluestone building, about which an observer later wrote: “It was not built for show. Its architecture is extremely severe, designed for use and durability.” 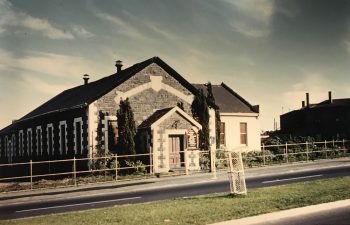 Over the years, the original building was added to and then later demolished and replaced by a small church building that adjoined the manse. All these buildings have now gone.

Winding the calendar forward to 2019 and the West Melbourne Baptist Church (known as the ‘Eighth Day Community’) is now housed on this same land but in a stylish mid-rise apartment complex. The church community, under the former leadership of Gary Heard, completed a development by which 75 apartments have been built on the site in several towers and with communal areas that give it a campus or village feel. 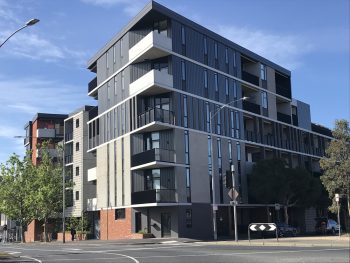 This time, the church has been much more attentive to its architecture and, with the developer and architect, has come up with a design that encourages community. Constructed with a seven-star energy rating from eco-friendly materials and with environmental features including a communal garden courtyard, a sustainable waste system, a compost maker, rainwater tanks and a green rooftop creating a habitat for native birds, these new buildings have people and relationships in mind. Since July 2018, 175-200 people have been making the ‘Hawke and King’ apartment village their home.

The nine apartments, which have been retained by the church, are being used in a variety of ways: a manse for the new pastor and his wife, Geoff and Lyn Pound, affordable housing for people struggling to find private rental homes, an accessibility unit and accommodation for ‘community builders’ both within the complex and the CBD.

On the ground floor at the southern end of the apartment complex is a multipurpose hall and smaller meeting rooms to house church activities and serve as a community centre ‘eight days a week’. No longer is the church separate as it is part of a vibrant apartment village and it is challenged by the question: “How can we as a church help to make North Melbourne, West Melbourne and the Docklands better places for all people?” This question is all the more urgent with the dramatic population changes and growth that are occurring in these suburbs on the edge of Melbourne’s CBD.

The development of the land and the sale of apartments have helped put the church on a more sustainable financial footing and is enabling the Eighth Day Community to be served by a fulltime pastor and a part time Community Centre Manager.

It is striking to see what a small group of people, captured by a God-given vision, has achieved. While new buildings have been designed and created in the last few years, the church is now focused on the design and building of the community.