Grace Munro was a woman of God whose heart of service for the kingdom truly shone wherever God led her. With her strong call to serve the Lord in missionary work, Grace ministered in Zambia in Africa for many years where she also became the first female board member of the Theological College of Central Africa (TCCA). 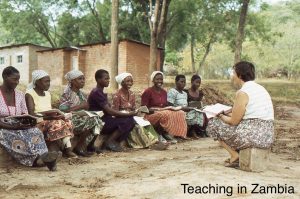 Here, she had worked as a nurse, a language teacher and a church planter and was instrumental in the Lenge Bible translation programme.

When Grace was in furlough from her ministry abroad, she became an active member of Kew Baptist Church, in addition to her work at Global Interaction. Grace was “characteristically efficient” and welcoming in her service and she volunteered at every opportunity. She welcomed “visitors by name”, took on teaching, preaching and offering roles, helped distribute elements during communion and sometimes even counted the offering too!

“I don’t think there was any question someone could ask about an aspect of the life of the church that Grace couldn’t answer.”

Grace was an invaluable resource on biblical history and theology, and nothing was ever too much trouble to do or to follow up for her, especially when it came to all areas of mission work. For instance, during her stint at the Global Interaction head office, Grace took on whatever was required – the role of editor for their Vision magazine as well as other publications including their annual Prayer Guide, their “Pray Daily” leaflet, the Prayer Hotline and even simply putting together prayer cards for outgoing cross-cultural workers.

Her service also took her to Balwyn Baptist Church where she “endeared herself to the congregation”. She championed multicultural diversity and inclusivity and sought to show generosity and neighbourliness to every person she encountered. 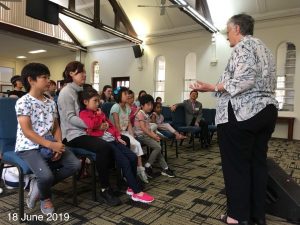 In her later years as her physical health declined, she was often heard saying that “my soul is at peace” and references the Horatio Spafford-penned hymn It Is Well With My Soul. “This song was written by a father who had just lost 4 daughters. And yet he was able to write ‘it was well with my soul’. My physical health will continue to decline, but spiritually God is giving me peace.”

Below are just some of the quotes from those who have been blessed by her presence:

“Grace has always had time for folk who crossed her path.”

“Many… have been on the receiving end of her kindness, her wisdom and her many God-given gifts.”

“Grace has faced many difficulties and challenges in her life, but has faced them all head on and with great courage.”

“[She was] a beautiful friend. I think of her as perspicacious, open in her views, full of wisdom, generosity and practical kindness. And, of course, there is her life of faith which shines forth, giving light and encouragement to all her know her.”

Grace passed into the lords presence in early September, soon after Balwyn Baptist Church had held a living celebration service for her,