At May Nourish this year, a special milestone was marked – the 60th anniversary since Rev. Ken Manley’s ordination as a Baptist pastor.

For over 60 years, Ken has been involved in Baptist ministry at state, national and international levels and known particularly in recent years for his exceptional contribution to Baptist history. He became a Baptist pastor in Sydney after school teaching, and then undertook further study at Bristol and Oxford Universities in the UK. He has been pastor of Baptist churches at Narwee, Armidale, Faringdon (UK), Pymble and Epping. He has lectured in three Baptist Colleges: South Australia where he was Vice-Principal, Morling College in Sydney and Whitley College here in Melbourne where he was Principal. Ken is author of several publications in Baptist history as well as his own autobiography and has served as a Vice-President of the Baptist World Alliance. He also served a term as President of the BUV.

At the age of 87, Ken remains actively engaged in Baptist life – as editor with the Victorian Baptist Historical Society, through his research and writing, along with involvement in his local church, Kew Baptist. His service here has included a year of interim ministry, a role he accepted post retirement after the untimely death of the church’s senior pastor, Rod Pell in 2010. 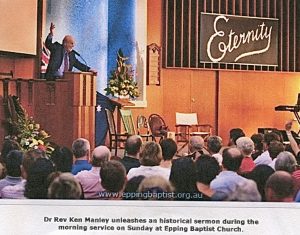 Marita Munro who provides a deeper overview of Ken’s life and ministry says, “Ken Manley is undoubtedly Australia’s foremost Baptist historian. Throughout his adult life, his commitment to living, teaching, researching and writing the Baptist story is legendary. The quality of his research is unquestioned and recognised internationally as well as nationally”.

Ken’s vocational life has always been rooted in his sense of calling as a Baptist pastor. “I wasn’t a historian who came to pastoral ministry but was a pastor who came to history through my vocation. It’s been an interesting and unpredictable course,” he reflects.

Ken speaks of his years in pastoral ministry with affection. Each church was very different, and he experienced the joys, fulfillment and challenges that go with pastoral life. His first student pastorate in Sydney was in the fast-growing suburb of Narwee. Looking back, Ken recollects he was very much growing up with the congregation, it being his first experience as a pastor. 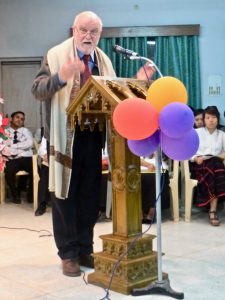 Ken’s time in teaching and leading in the theological college context were “good years”. It was in 1987 that Ken and his family moved to Melbourne and he took on the Principal role at Whitley College. He describes this era as a time of great growth for the College.

Being involved in Baptist World Alliance for Ken was a rich time of fellowship and of expanding his network as he got to meet many Baptists from around the world. He describes his term as Vice-President in particular as a great experience.

Since retirement in 2000, Ken’s main output has been in research and writing, something he continues to enjoy, and he has a number of projects still on the go. He is a published author of several books (include link here to them), contributor and editor of others, and is editor of Our Yesterdays, an annual publication from the Victorian Baptist Historical Society. At least two of Ken’s books are biographies of significant Baptist people in Australia’s history. In the writing of these, Ken has written the life of that person, but has intentionally used their biography to illuminate Baptist denominational life at that time. This can be seen in his biography of TE Ruth (who was one of the ministers of Collins Street Baptist during World War 1) and the Ken’s biography on Samuel Pearce Carey (grandson of William Carey) An Honoured name. Mention must also be made of Ken’s outstanding work of research and history: From Woolloomooloo to ‘Eternity: a History of Australian Baptists’ Volumes 1 & 2. 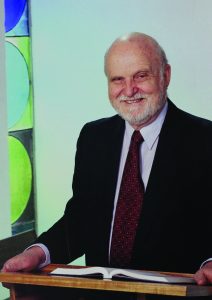 We celebrate and honour Ken Manley for his remarkable contribution to the Baptist world over so many years. We give thanks to God for the many lives he has touched through his pastoral ministry, theological teaching, his research and writing and the many other ways he has served and indeed continues to do so. We echo some of his favourite words (a quotation from Dag Hammarskjold) which forms the title of his 2018 autobiography “For all that has been – thanks!”

At the end of our conversation with Ken for this article, we asked what words of encouragement he would offer for today’s pastoral leaders. He responded with these pearls of wisdom: “These are challenging and changing times, but the basics have always been there – teaching, caring, evangelising, a life of discipleship that leads others. Know your gifts, seek God’s grace to use them and find the ministries that allow you to express those gifts”.