For as long as anyone at Brunswick Baptist can remember, nine bollards have stood on the Sydney Road street boundary.  In the last 8 years they have been regularly ‘yarn-bombed’ by a group in the congregation, sometimes with a message, often also with a sense of fun. From the nativity yarn figures every Christmas to figures dressed as firies, with a ‘Thank You’ sign during the terrible bushfires last summer – the colourful and quirky artwork often has an underlying message and always is done with a sense of fun. 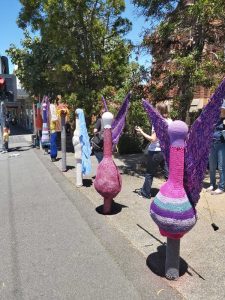 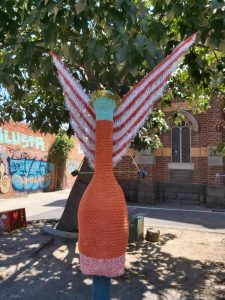 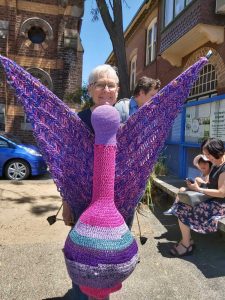 Brunswick Baptist member Trudy Van Meggelen, one of the founders of their ‘Yarn over Yarn; group remembers: ‘Several years ago I had a conversation with a fellow church member about how ugly the poles outside the church and we decided that something needed to be done! So in the name of covering the front eyesore, our yarning began’. A small group at church was established – called yarn over yarn and members of they group began knitting, crocheting and sewing. The response from the Brunswick community has surprised and motivated them in a very heartwarming way. 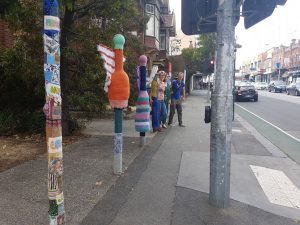 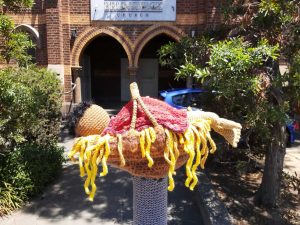 Each Advent there is a Nativity theme with an increasingly pregnant Mary, and a baby who arrives on Christmas morning. The present display includes four bulbous angels who attract comment, photos, selfies, and hugs from children. Although dressing and maintaining the poles is a lot of work, the group is encouraged by the feedback from passers-by and requests to participate in the making of them. Recent comments include an impassioned “Oh, it does my heart so much good!” and “I luuurve these poles! … I bet this is a great little church! I bet they’re a good people!”

However this year’s regular nativity figures have a new backdrop – the sign ‘Time for a home’. 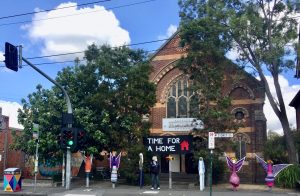 The sign – also made by the Yarn over Yarn group – reflects the congregation’s concern about a much bigger issue: the treatment of asylum seekers and refugees in Australia. Brunswick Baptist is no stranger to caring for refugees. From setting up asylum seeker accommodation Baptcare Sanctuary, to welcoming and supporting asylum seekers and sometimes housing refugees in their congregation to running the Gift of Refuge campaign in 2013, in which former Brunswick Baptist Pastor Tri Nguyen, walked a small boat to Canberra.

However the problem of asylum seekers who arrived by boat and being detained for year after year – a issue some try to avoid over family Christmas lunch – has proved to be a difficult one for the church to know how to respond to. As Brunswick Baptist pastor Mark Payne puts it: ‘I have been deeply troubled, and often feel powerless, in the face of the treatment of refugees in Australia’.

In fact, about 60 refugees, who have been detained since 2013, are now held just 5 km down from the church at the newly renamed Park Hotel in Swanston St. (formerly the infamous quarantine hotel Rydges on Swanston). Brought to Australia under the Medevac legislation, the men are now facing their 8th Christmas in detention.

Through contact with Love Makes A Way, a Christian organisation that advocates for asylum seekers and refugees, the church became aware of the Time for a Home campaign.  The congregation had a conversation one Sunday recently about what they could do. One idea that was acted upon was to hold a prayer vigil out the front of the church. So church members gathered on Sydney Road, in front of the newly made sign, singing songs and welcoming passersby to stop and chat or have a quiet moment to reflect.

A number of church members also took photos of themselves at home, holding a ‘Time for a home’ sign.  Payne, who had a photo taken with his young family outside his apartment in Brunswick, reflects further: ‘‘Participating in the Time for a home campaign, and prayer vigil at our church, has helped me to meaningfully connect with those held in detention. In 7 years I have had 3 beautiful children, worked 3 jobs, travelled to 3 continents and completed a Masters Degree. No-one should have to put their lives on hold for the sake of politics’.

Payne goes further. ‘I hope the church, in response to God’s call, can stand with them in prayer and action. We believe the first step towards seeing people answer Jesus’ call to love our neighbours is to listen to stories of injustice around us. One of the refugees detained in Melbourne Saif Ali Saif said: ‘I am separated from my wife and I can’t hug my son. I miss them very much. I don’t understand why I cannot live with them when they’re out in the community’’.

Van Meggelen continues: ‘The nativity is a perfect example of acceptance and welcome of foreigners to a strange land – or if you like – of refugees seeking shelter. This Christmas story is something that we in Australia have celebrated since the arrival of Europeans so it makes sense to use the narrative to remind government that it is time for these refugees to have a home. So it therefore makes perfect sense to combine the nativity poles with the message “Time for a home”