Some groups of Baptist churches have grown slightly (Queensland and Western Australia), while others have declined more than Victoria. Overall Baptists nationally have declined by 2% (that is 7347 less Baptists). 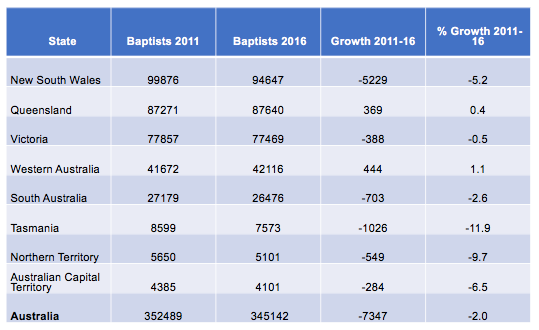 At a denominational national level, Baptists compare favourably. Pentecostals are the only group that are growing, by a significant 10%. All other denominational groups are declining more than Baptists, some with significantly sharp decline. 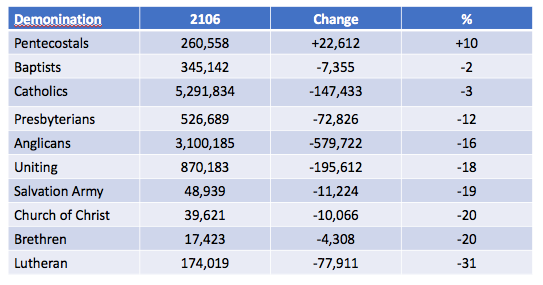 What can we learn from the numbers of Victorians identifying as Baptists?

Neither is a half-percent decline of Victorian Baptists keeping pace with Victorian population (which increased 10.7% to 5,926,624 on census night; the highest increase of all States and Territories, partly because Melbourne is the third fastest growing region in the country).
[From http://www.abs.gov.au/ausstats/abs@.nsf/MediaRealesesByCatalogue/C508DD213FD43EA7CA258148000C6BBE?OpenDocument]

Victorian Baptists may find some comfort in not declining as much as some other State Baptist Unions or other denominations.

However, it is important to analyse the composition of the figures. A lot of the growth of Baptists over the last two decades has been from migration. For example, in 2001-2011 Baptists in Australia grew 43,244 to 352,499. But this included 42,400 Baptist immigrants (which was 98% of our growth). Without migration growth, we would have declined.
This reality was previously analysed in Darren Cronshaw and Philip Hughes, Baptists in Australia: A Church with a Heritage and a Future, Melbourne: Christian Research Association, 2013, 75.]

In Victoria, many Baptists are migrants, and the biggest single source of growth would be our Chin and Karen sisters and brothers from Myanmar (Burma). Without this influx of new Baptists and their vitality, Victorian Baptist decline would be much worse.  Moreover, migrants tend to be more committed. 29% of migrants attend church monthly or more, compared to only 15% of other Australians who attend monthly or more.

Growth from migration in Victorian Baptist church life, and noticing the increasing cultural diversity in our society challenges us in two ways. Firstly, it is a challenge to be as hospitable as we can to people of other cultures and welcome not just their attendance but their active contribution to the life of our churches. Secondly, since migration growth masks our lack of effective evangelism, it is a challenge to reprioritise our commitment to reaching Australian-born people.

This is the first of a series of “Catalyst Church Life Snapshots” that will appear in Baptists on Mission over coming weeks. Look out for future snapshots focusing on what we can learn also from the National Church Life Survey 2016. Feedback/comments welcome by email to missioncatalyst@buv.com.au