National Church Life Survey have been developing questions and ways of analysing healthy leadership since 1991. The survey of hundreds of thousands of Australian church-goers, including 9000 Victorian Baptists, offers insights into the strength and possibilities of new growth and energy that could lead to fruitful mission around our churches. 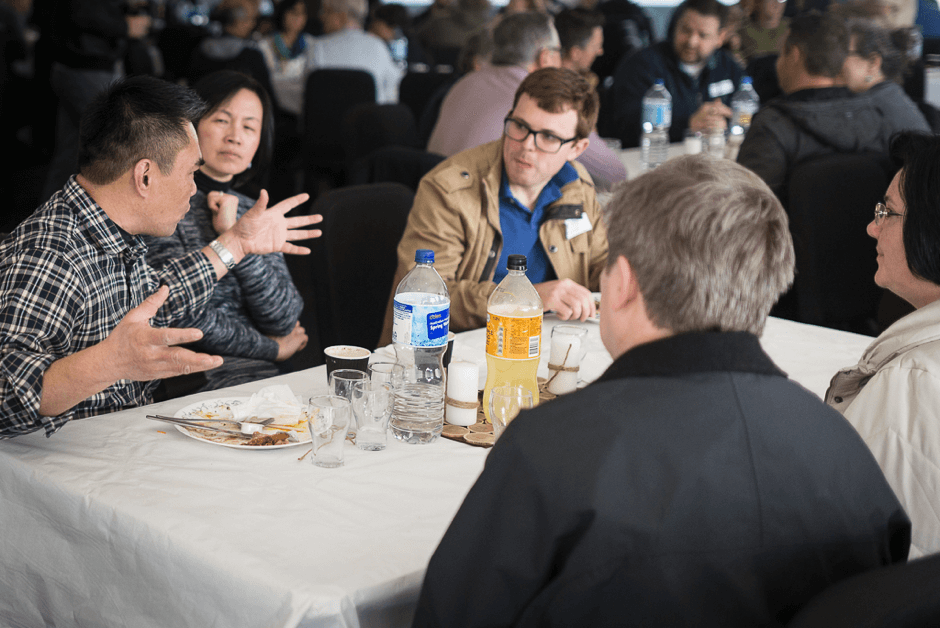 We noted optimistic signs in a previous BOM snapshot that:

68% of surveyed Victorian Baptist attenders are at least partly aware of and committed to the direction their church is going in.

36% strongly agree that they would support new initiatives and another 50% said they agree.

73% of attenders agree their church is always ready to try something new.

Thankfully Victorian Baptists are showing a healthy openness to change and innovation.

This snapshot focuses on attenders’ involvement and giftedness as leaders.

Firstly, a good proportion of Victorian Baptists who were surveyed are involved in some form of leadership or ministry. 41% said they perform at least one leadership or ministry role. Churches need to empower the whole people of God for ministry and mission. This is not just about ministry roles in the church of course. God’s people need support if discerning and fostering the mission of god beyond the walls of the church. But healthy churches always have a higher proportion of people in the church contributing to their ministries, rather than relying on the hired holy people or few eager volunteers. 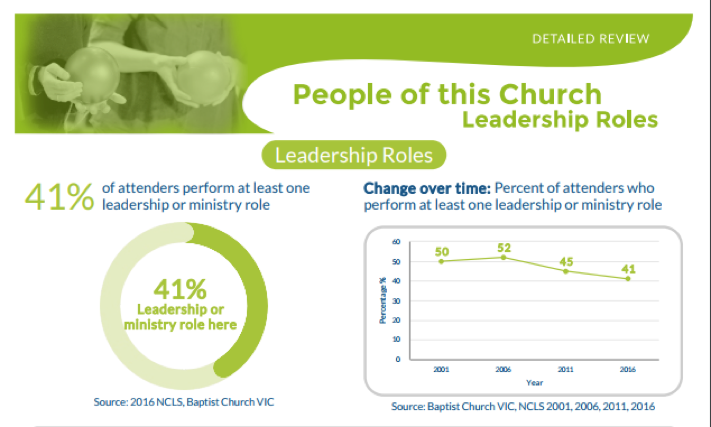 However, it is worth stating the almost obvious other element about this figure. 41% of people involved in at least one role means that 59% are not contributing in any leadership or ministry role! Moreover, 41% involvement is the lowest involvement in Victorian Baptist church life for two decades. It was 50% in 2001, up to 52% in 2006, and then on the decline to 45% in 2011 and now 41% in 2016. We ca celebrate those who are involved and released into ministry or leadership, but also be hugely challenged to consider how we can encourage others to contribute in meaningful ways.

NCLS asked attenders about whether they feel encouraged to identify and use their gifts. This is a key question about the extent to which our pastors and leaders are empowering of others. In 2016, 21% of surveyed Victorian Baptists said that their leaders encourage them to find and use their gifts to a great extent. This is slightly increased from 18% in 2011 but down from 22% in 2006 and 27% in 2001. 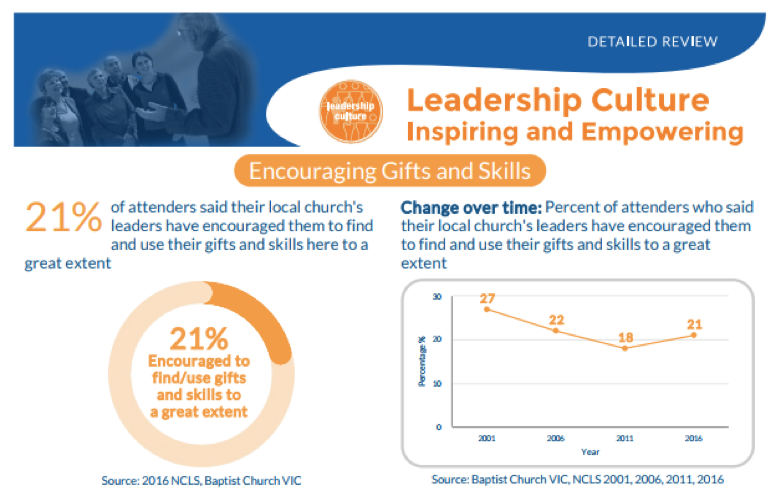 There seems to be an unfortunate downward trend in people being involved in leadership and ministry, and having their gifts identified and encouraged.

When you look at other responses, it is encouraging that another 31% say their leaders encourage them to find and use their gifts and skills to some extent (so at least 52% feel this is done for them to a great extent or to some extent). But many do not feel their gifts are identified or exercised. 58% of people are happy with their current level of involvement. Interestingly 1% would like to be less involved and a little less overworked! But a huge 30% say they would like to be MORE involved. What a resource for local church ministry and mission if local church leaders could give a little effort and focus to identifying and empowering people in their gifts and skills. 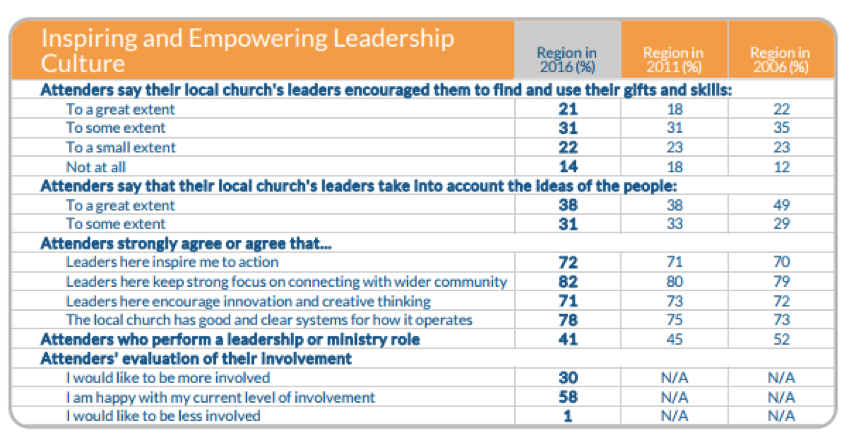 It is interesting to look also at generational differences in how people say their gifts and skills are encouraged. A higher proportion (58%) of the younger generation of 15-31 year olds (Gen Y) feel their gifts and skills are encouraged to at least some extent, compared to 50% of 32-52 year olds (Gen  X) and 52% of 53+ year olds (Boomers, Busters and Builders). It is encouraging churches are actively encouraging more younger people to be involved, though this difference is also a warning not to forget the potential contributions of Gen X and older generations of gifted and skilled Christians. 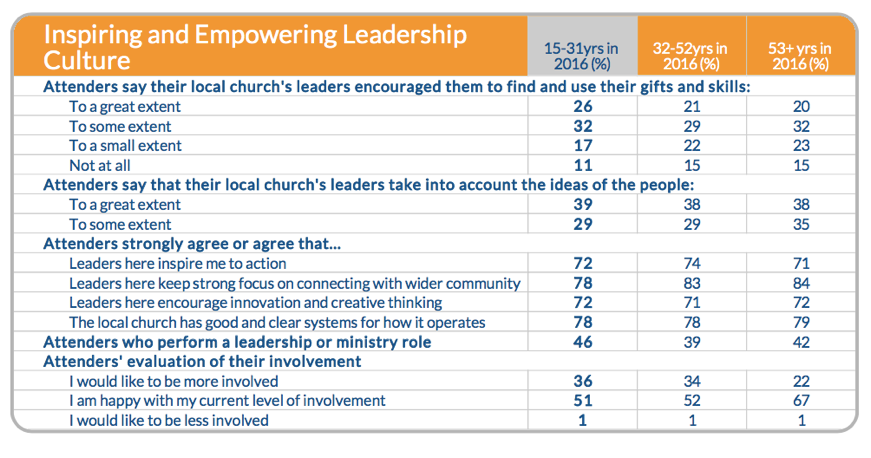 The final insight about the Victorian Baptist responses was where people felt they had gifts and skills, and in what roles they were contributing. There is a healthy self-awareness of people’s own gifts and skills shown in their responses, and a healthy mixture. It is terrific to see, for example, that 35% of attenders feel their gifts and skills include hospitality, and 33% feel they have strong interpersonal gifts. These sort of responses are helpful for individual local churches to consider their gift mixes, and for leaders to talk to people about where they can best contribute. 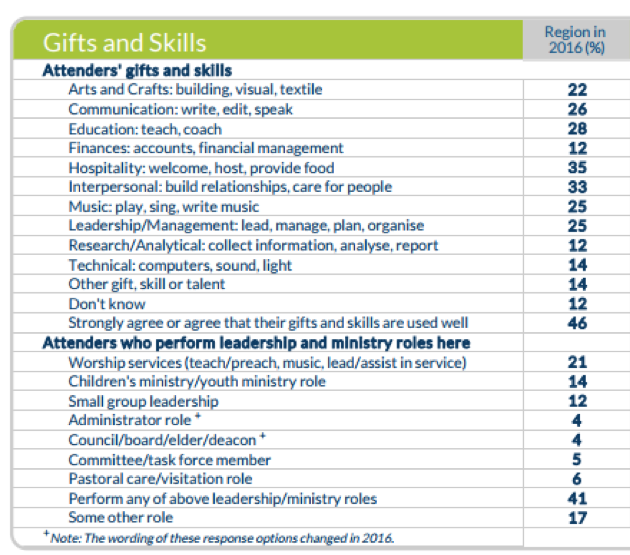 Again, it is also helpful that these responses are available in generational categories. For example, it is interesting that a high proportion (42%) of GenY 15-31year olds in Victorian Baptist churches identify gifts and skills in music, compared to 25% of Gen X 32-52 year olds and only 17% of older generations 53+. Moreover, 27% of Gen Y attenders perform a role in worship services, compared to 20% of Gen X and/or older generations. This might also say something about the sort of young people that our churches attract and keep; i.e., are we retaining younger generations who are not into music? 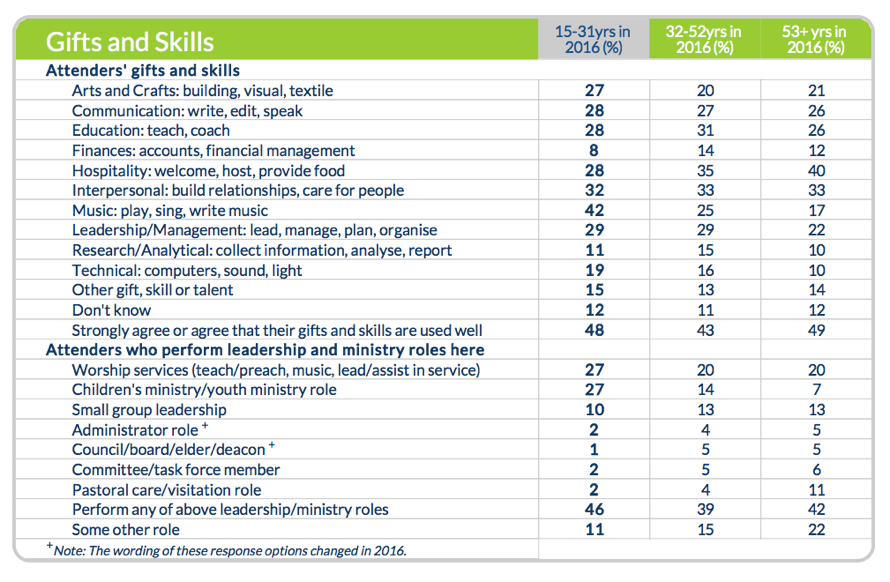 Local churches can be a great gift to their communities and neighbourhoods. When their gifts are identified and empowered, church members can add such value to their local church and through the ministry of their church add value to their communities. These NCLS responses suggest much we can celebrate about Victorian Baptist church life. It also suggests many areas where we can better identify and empower the talented and gifted contributions of people across the generations in our churches.