My father-in-law died two weeks ago, and we buried him on the weekend. 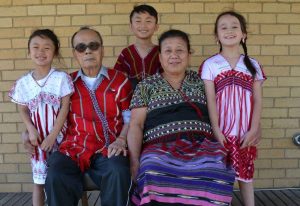 I have experienced the loss of family members in my own, Anglo-Australian family, but the loss of someone from my wife’s Karen family has been new and different. There have been tears but there has also been incredible support from the community. I have learned that grief, loss, death and dying in the Karen community are very public, very communal and very relational.

My father-in-law, ‘Pu’ (Grandfather) Hsar Yuh had fought with the British Army in World War 2 and then been a frontline commander and intelligence officer with several guerrilla armies during the civil war in Burma. He was fiercely independent, had got around on a bike until a few years ago, and resolutely wobbled around on a walking stick and then a pusher. Around Christmas his health had started to go downhill but he refused to go to hospital. In the first week of February he was not only ill but also in pain and finally allowed his daughter Say Htoo to take him to hospital. They did a CT scan and called my sister-in-law into an interview room. ‘When they asked me to sit down and put a box of tissues in front of me, I knew it wasn’t going to be good news’, Say Htoo told us later.

Pu had bowel cancer that had spread to his liver, lungs and bones. The doctors told us it was too late for treatment and further testing was pointless. They estimated he had anything from two weeks to a few months left to live.

The nursing staff quickly transferred Pu to a private room. This wasn’t for the benefit of my father-in-law – it was for the benefit of other patients who might want some peace and quiet. Pu had a constant stream of visitors who talked, prayed, read from the bible, and sang hymns.

Pu was rarely alone. In addition to visitors a family member always stayed with my father-in-law to care for him. One of my sisters-in-law, their husbands, or myself would sleep overnight with him. Pu’s first cousin – a Karen Baptist – had married an ethnic Tai Yai Buddhist and their daughter Sam Hom had come to Australia as a refugee. In Burma love and life often cross ethnic and religious boundaries. Sam Hom’s husband Tun Thein, also a Tai Yai Buddhist, had been a nurse caring for people with HIV/AIDS before coming to Australia. If they weren’t at work they were at the hospital. They were loving, attentive and skilful, and their support invaluable. 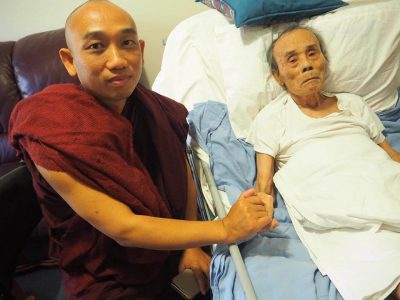 Pu was transferred to the palliative care ward, but he refused to accept he had cancer. In his long life he has been shot and injured by shrapnel several times and had malaria and other tropical diseases more times than anyone could remember. He had survived it all and believed he would survive this one too.

Werribee Mercy is a Catholic hospital and we appreciated being able to go to the hospital chapel for a few minutes of prayer. A Qur’an and a prayer mat on a shelf at the back of the chapel made it clear everyone was welcome in the chapel whether or not they were Catholic.

The week before the Labour Day weekend Pu came home. He had lived with his wife, Eh Htoo, his son Hsar Htoo, his daughter – my wife – Htoo Htoo Eh, our daughter Sophie and myself, and this is where he had said he wanted to die.

Initially he refused to use the hospital bed that had been installed in the front lounge room, insisting on returning to his bedroom where he had a pair of military binoculars hanging off the bed end. I took a turn to sleep close by him, stretching a mat outside his bedroom, and wandered bleary-eyed into work the next day.

By the Labour Day weekend Pu could no longer walk and agreed to sleep on hospital bed. He could no longer talk and did not want to eat or drink. Friends from Bendigo came to visit, their car boots jampacked with vegetables from community gardens. Pu no longer seemed to recognise everyone, but for an hour he held the hand of a Karen Buddhist monk who is an old family friend. We didn’t think Pu would survive the weekend, and my sisters-in-law, their husbands and children moved in. The pastors from Westgate Karen Baptist Church – Rev K’Paw Mwee and Rev Dr Ner Dah – came daily with their families. I don’t know how many Anglo-Australian pastors would bring their families on a pastoral visit, but in Karen culture it works. Ner Dah and  K’Paw Mwee’s wives helped with the cooking and talked, and Ner Dah’s children played on their iPads or had pillow fights with our kids. 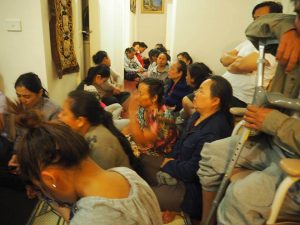 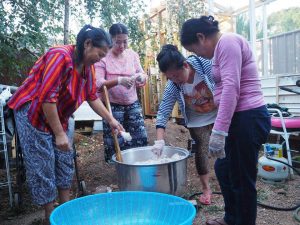 The Tuesday after the long weekend my wife and I returned to work and the kids returned to school. In the afternoon my sister-in-law Say Say rang to say Pu had lost consciousness and we better come home. Pu’s granddaughter Deborah goes to school with the daughters of the Werribee Karen Baptist church pastor, Gail Moe. Gail Moe and her family brought her home and stayed with us. When I got home my father-in-law’s breathing would slow, stop, and then start again. Pu’s grandson Alvin finally returned from a school excursion and said goodbye. Five minutes later my father-in-law’s breathing stopped and his skin colour changed. Tun Thein checked his pulse and told us he was dead, and the tears started. 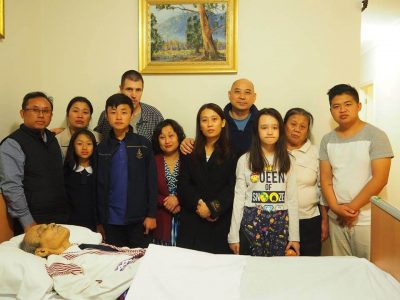 I called Palliative Care to report my father-in-law’s death. A nurse with a caring voice asked if I was alone. Alone? By 8:30pm we had fifty or sixty people squeezed into the house for an hour-long prayer service. The pastors lead the service from the lounge room, sitting alongside the body of my father-in-law. After the prayer service people ate and took photos with the body of my father-in-law. I couldn’t imagine Anglo-Australians taking photos with a dead person, but if you come from a culture where there is always a group photo, and people are comfortable with death, it seems natural.

Pastor Ner Dah stayed until midnight, and Pastor K’Paw Mwee and his wife stayed overnight. My wife and her sisters couldn’t sleep, and they stayed awake and talked.

In the days that followed we had a constant stream of visitors who came to bring food or contributions for the funeral, and to share our grief. Every evening until the funeral there was a prayer service followed by a meal, and every day people would bring enough food to ensure there was enough. Our Buddhist cousins joined in bringing food, and stayed through the prayer services. The night before the funeral cousins drove down from Bendigo with enormous cooking pots and an entire pig (thankfully dead and in pieces) in the back of their Toyota four-wheel-drive. 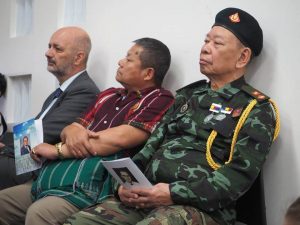 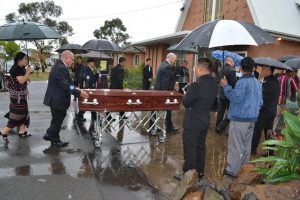 My father-in-law had the funeral that reflected his life. There were prayers, hymns, bible readings and sermons in Karen and English. A Karen flag was spread across the coffin. Another former guerrilla commander led the congregation in saluting Pu, while Pastor Eh Doh Wah Ri played the Last Post on a trumpet. The diversity of the people who filled the church – Karen and Anglo-Australians, Christians, Buddhists and Muslims – reflected the diversity of the world he lived in.

Pu was buried at Altona Memorial Park a few metres from his best friend, another Karen leader who had dedicated his life to ‘the revolution’. We went home for another prayer service, followed by a meal of pork, rice and noodles. The next morning we slept in.

Martin West is a member of Westgate Baptist Community.