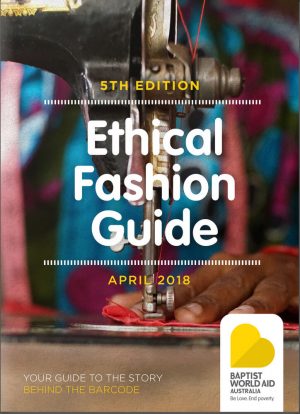 Five years since the Rana Plaza tragedy that claimed the lives of more than 1,000 garment workers, an industry-leading research report launched today reveals the fashion industry may finally be making headway in protecting workers.

Baptist World Aid Australia’s fifth and largest Ethical Fashion Report graded 114 apparel companies (or 407 brands) from A to F on the systems that companies have in place to uphold the rights of workers. The report revealed significant improvement in supply chain transparency, noting that until the Rana Plaza tragedy, few global fashion companies chose to make information about their supply chains publicly available.

“The global fashion industry now recognises that transparency demonstrates a willingness to be accountable to consumers and workers, and we commend the 35% of companies publishing full direct supplier lists,” continued Mr Nimbalker.

Mr Nimbalker stressed that worker empowerment and payment of a living wage remain the areas where the most advancement still needs to be made, while tracing of raw materials remains a significant challenge.

“Year on year, our Report has shown that companies are not taking the challenge of paying a living wage seriously. Sadly, our fifth report is no different, with only 17% of companies able to prove they were paying all workers a living wage.”

“Outland Denim is a standout when it comes to demonstrating paying all its workers a fair living wage, whereas Ally Fashion, Decjuba, Wish, Pavement United Brands and Voyager Distribution all received an F grade due to a lack of transparency with labour rights management systems.”

“Today’s consumers want assurance that the brands they buy from are doing their bit to protect workers from being exploited, and the global fashion industry has responded to this by improving its systems, forming new alliances, and becoming more transparent. That being said, there is still a great deal of improvement to be made.”

Knowing suppliers from farm to factory
While The Report reveals that most companies know all their manufacturing suppliers, only 18% of companies know all their fabric suppliers, and only 7% know where their raw materials like cotton originated.
“Fashion production throughout the Asia-Pacific is marred by the presence of slavery, and problems of child labour remain persistent,” said Mr Nimbalker. “If companies can’t identify, or don’t care, where all their materials are made, then how can they be sure workers aren’t being exploited or even enslaved?”

Living wage a major concern
The Report reveals that only 5% of companies could demonstrate that all their manufacturing workers were being paid a living wage, and 70% of the industry is yet to take significant action to improve worker wages.
“The global fashion industry can facilitate a road out of poverty for hundreds of thousands of people, or drive oppression and exploitation. Companies should continue to strengthen their labour rights systems and ensure that workers – from farm to factory – receive a living wage,” said Mr Nimbalker.

Transparency – if shoppers can’t see, how do they know?
The Report finds that more companies than ever before are practicing transparency, yet more than half (54%) of the companies assessed were yet to publish any details of their suppliers, demonstrating an unwillingness to be held accountable for their treatment of workers.

The Australian Government has committed to legislating a Modern Slavery Act in Australia by the end of the year. Among other things, this legislation will require companies to publish details of the systems they have in place to ensure that workers aren’t enslaved.

The gender pay gap
This year for the first time, The Report’s grading metric assessed companies on their gender policies and strategies, revealing widespread gender-based discrimination in recruitment and sexual harassment in the workplace. All countries in the Asia-Pacific reported a gender pay gap – with the gap most significant in Pakistan, India, and Sri-Lanka at 66.5%, 35.3%, and 30.3% respectively.
“The last year has proven to be a transformational one for many women, with the #MeToo movement shining a light on entrenched workplace sexual harassment. However, we can’t lose focus on the plight of lower-wage workers in industries where sexual harassment is also rampant. “

Tracking Fashion’s environmental footprint
In another first Baptist World Aid began initial assessment of companies’ efforts in environmental management, and anticipates this to become a part of the formal grading system in 2019. Preliminary results reveal a significant correlation between the strongest labour rights performers and strong environmental systems.

Although many large global firms had some environmental systems in place, firms headquartered in Australia and New Zealand are largely trailing behind their international counterparts.

TRANSPARENCY AND TRACEABILITY
• In 2013, just 16% of companies were publishing the names and addresses of all their manufacturing suppliers. It is now 34%.
• 12 companies begun publishing their supplier list in the last year, including Jeanswest, Asos, and Gorman.

AUDITING AND SUPPLIER RELATIONSHIPS
• Efforts to trace suppliers have improved substantially in the last five years. In 2013, only 41% of companies were tracing inputs (such as fabric suppliers) and 15% were tracing their raw materials suppliers (such as cotton farms). This year it’s increased to 78% and 42%, respectively.
• Kathmandu remains a stand out performer when it comes to tracing raw materials, using a combination of BCI and Fairtrade cotton to trace three quarters of its cotton supply and, through Responsible Down, has traced 100% of its down supply.

WORKER EMPOWERMENT
• The majority (78%) of companies surveyed were revealed not to have clear strategy in place to address discrimination faced by women in their supply chain.
• Glasson were identified as going beyond assessing and monitoring specific gender policies for most of its sourcing countries, with established strategies to promote gender equality in their supply chain including: encouraging factories to have a female worker representative within factories that have a workforce with over 50% female staff; asking that suppliers display information on women’s rights within facilities; expanding business relationships with female-owned enterprises; providing or supporting training to workers, suppliers, and Glassons’ staff.

ABOUT ‘BEHIND THE BARCODE’ SERIES The 2018 Australian Ethical Fashion Report is the seventh report to be released in a series investigating the ethical practices of consumer industries. Since the release of the 2013 Australian Fashion Report and the Electronics Industry Trends Report in 2014, thousands of consumers have worked to influence the labour rights practices of companies and brands including Kmart Australia, Target Australia, Woolworths and Coles.