My name is Gail Moe Dwai. I was born in the midst of conflict and civil wars in a Myanmar jungle in 1976 when the Burmese military dictators forced villages under their controlled area to relocate. My parents tried to flee from the forced relocation and hid in the jungle. I was born under the bush with no assistance from a midwife, with just my parents and small siblings around. Praise God, I survived and my mom was healthy.

Our family hid and lived in the jungle for many years. One evening, my father and uncle were caught by the military patrolled groups. They killed my uncle the same night but let my father lived. I was only two and didn’t remember much. My father told us that he was taken to a camp where he was tortured and forced to work. The group released him after three months but he couldn’t reunite with us in the jungle until many months later. We continued to hide in the jungle until I was five years old. Our family sought refuge at the Thai-Burma border where the Karen Nation Union based their military headquarter.

I grew up and received my basic education in Karen schools at the border. In 1995, the Burmese military attacked the Karen headquarter and we were forced to flee to Thailand where we became real refugees and were put in the Thai refugee camp.

In the year 2000, I decided to risk my life to pursue further theological studies. I sneaked out of the refugee camp and went through Burma to India illegally. Having lived in jungles and refugee camps all my life, I’ve never experienced town or city life. I’ve never even travelled outside my confined area in Burma or Thailand. I was anxious and constantly worried about being caught throughout my two-weeks journey to India. I prayed to God everyday and had my hope and faith restored through Christ who gave me strength. And Praise God, I completed my Masters in Divinity at the Oriental Theological Seminary after three years.

I went back to the Thai refugee camp and began teaching at the bible school. In 2006, I met Rev Geoff Wright (a former pastor at Westgate Baptist Community Church) who visited the refugee camp and he helped me with the application for an Australian humanitarian visa. Together with the other Karen community leaders, our visas were granted in 2008. And with further help from the BUV’s Refugee Airfare Loan Scheme, I was able to leave the Thai refugee camp and travelled to Melbourne. Praise the Lord for that.

In May 2008, a new congregation started in Werribee Baptist Church and I was appointed as the pastor prior to my arrival in Melbourne.

“Before I formed you in the womb I knew you, before you were born I set you apart; I appointed you as a prophet to the nations” Jeremiah 1:4-5. The call to Jeremiah is very much similar to my life. I finally arrived in Melbourne on 8 January 2009 and begin my new life in a city! 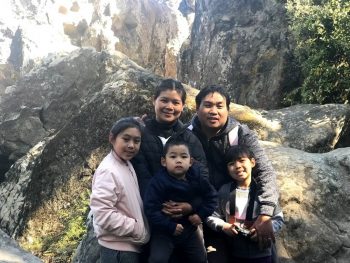 Please pray for our second generation to carry on the ministry of the church – the tradition of loving, caring, and hospitality to one another.