After three months in Melbourne, Mu Tru and her family are struggling to get used to the cold weather but told us with big smiles on their faces that their new home offers many more opportunities than a refugee camp.

Mu Tru’s family are among the three ethnic Karen refugee families that have recently arrived in Australia with the help of the BUV Refugee Airfare and Assistance Loan Scheme (RAALS).

Mu Tru is grateful for the opportunity. “Thanks to the BUV for RAALs that we can come to Australia. It is freeing.” She told us, speaking through an interpreter at the family’s new home in the eastern suburb of Melbourne.

“Living in the camp is hard.” Mu Tru reflects on her 24 years living in Mae La Oon camp at the Thai-Burma border. She sought refuge at the camp with her husband and their three-year old child when violence erupted at their village.

The minority Karen have suffered persecution for decades and nearly 140,000 are living in closed Thai refugee camps such as the Mae La Oon camp after fleeing across the border.

Mae La Oon camp houses over 10,000 persecuted Karen people. During their time in the camp, Mu Tru saw the numbers of refugees swell due to relocations, closing of nearby camps, and further persecution of the Karen people.

Built on a hilly area around the banks of the Yuam River, conditions in the overcrowded settlements are desperately challenging. Many refugees live in makeshift shelters unable to withstand monsoonal rain and flash floods.

In September 2002, the camp experienced a devastating flash flood that destroyed hundreds of houses. Tragically, 26 refugees lost their lives in the flooding. Mu Tru’s family was devastated as they faced the double crisis of displacement and natural disaster. Life was hard and the future was bleak.

In 2005, Mu Tru saw hope for her family when the Thai Government provided resettlement opportunities through the United Nations High Commissioner for Refugees (UNHCR). Over the years, many of Mu Tru’s neighbours departed from the camp to countries of freedom and opportunity, with many finding homes in the United States and Australia. Mu Tru’s family too applied for the Australian refugee visa and waited in hope for their own freedom.

Earlier this year, Mu Tru’s family and two other Karen families from the nearby camp boarded the same plane and arrived in Melbourne in anticipation of their new life. All three families are now establishing themselves in the community, learning English and dreaming of what the future holds. 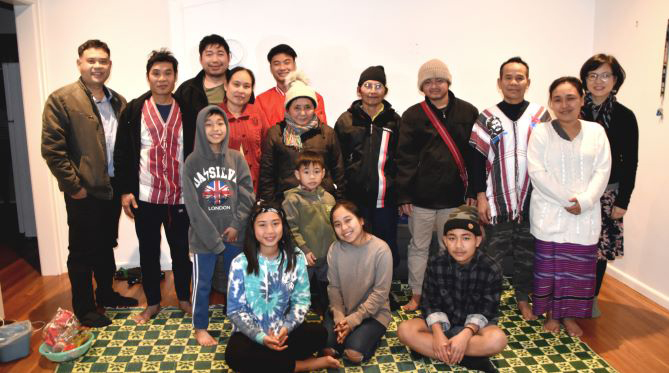 Maung Ko, head of one family, is excited for the future, “We are happy and safe in this country. There is education and better future for our children.”

The families have been welcomed into the Croydon Hills Baptist Church’s Karen congregation and the Eastern Karen Community Association of Victoria, an inter-faith community set up to help integrate refugee families and support their culture.

“It feels like family”, said Mya Bu, mother of two teenagers who have attended the cultural events. Mya Bu’s family is also looking to the future with enthusiasm. “Our dream is to become Australian Citizens because it means so much to have an identity, to be able to travel and have freedom.”