As I drove up the Hume Highway with Regional Pastor Robert Hayman and Partnership Development Pastor, Andrew Naylor, I felt unsure of what we would find. The fires had burnt through Cudgewa and come right up to the edges of the Corryong township. I had spoken to the Corryong Baptist Church Pastor, Graeme van Brummelen just after New Year’s Day when the fires had caused most of the town to evacuate. What would we find?

We picked up the Wodonga District Baptist Church Pastor, David Hodgens as we made our way towards Corryong, passing through a police checkpoint where a big sign read “Road Closed.” David Hodgens told us how on New Year’s Day he responded to calls as a chaplain for Victorian Council of Churches Emergency Ministries (VCCEM) by travelling to Corryong. As most people were leaving David entered an area where there was no mobile coverage and was unable to receive advice from VCCEM to leave the area.  David met with Pastor Graeme and other ministers to provide whatever help they could. There was now a relief centre that had been set up in Corryong and Pastor Graeme and two other pastors from Corryong helped to get things up and running in partnership with other emergency services. Graeme used the food the church was going to use the night before for their new year’s celebration to feed those who arrived at the relief centre. David led a team who knocked on doors in Corryong and recorded who was home and whether they were staying or leaving. If people needed help they sought to arrange for the support they needed. 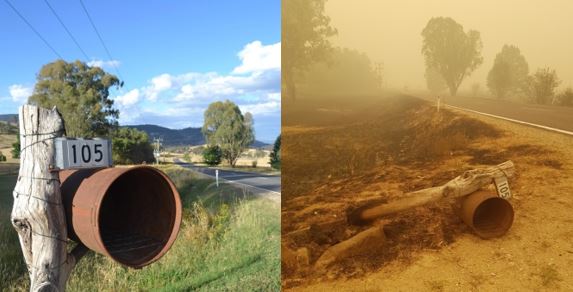 A property in Cudgewa before and after the fire

Graeme himself, was among those who lost a significant number of cattle from his own farm which had to be put down. As he helped others in the same position, he remembers coming over a hill and seeing a farmer standing in his field with 45 head of cattle lying dead in front of him. Other cattle were saved but the fences were down and he couldn’t leave or the cattle would wander. The farmer told Graeme that when he saw him and the other town Pastor come over the hill he felt like he had seen two angels. They helped him focus on getting a temporary fence up and focus on one thing at a time.

Meanwhile, back in the town relief centre where Pastor David Hodgens was assisting, one person became very anxious and agitated. He didn’t know what had happened to his friend. Was she alright? Was she in danger? He became more and more distraught. David noticed him getting upset and went to talk to him. As they talked, David realised that he had visited the house of the very friend he was anxious about. He opened his log book, pointed to her address and told the man she was fine and had evacuated after David had arranged for her to leave. The man calmed down and David silently praised God that he cared enough to put David in a place to bring peace in a way that David could never have forseen.

Speaking with Pastor Graeme we were so encouraged and inspired to see his love for the people of Corryong and his desire to love and support them in Christ-like way. The people in the relief centre could also clearly see Graeme and David’s love for them. When Graeme realised that they were unlikely to have a service on Sunday morning because of the number of people who had been evacuated, the people who had never attended Corryong Baptist Church before said, “We’ll be your congregation.”

There is so much work ahead for those recovering from the devastation of the bushfires. Numbers of families within the church had properties burnt and cattle lost. One family lost their home. It was a privilege for us as staff from the BUV, to listen, to pray with and to seek to help direct the funds that our Baptist family has so generously donated. Thank you for your prayers. Thank you for your gifts. They mean so much to the people of Corryong and the rest of the state that has suffered through the bushfires.