Around 100 leaders from churches within the BUV gathered to explore issues and share stories around youth discipleship in the context of cultural diversity and paths to belonging at Whitley College on 24 and 25 November 2017. 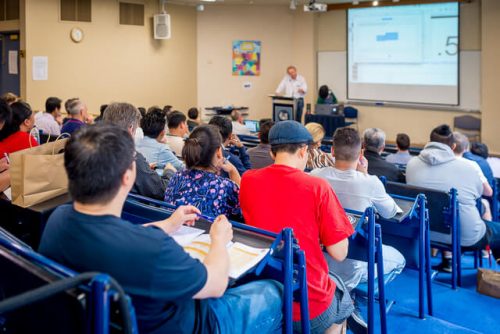 This pioneering conference was immensely important for an increasing population of culturally diverse Next Generation youth which now make up of the BUV.  They have the potential to have a big impact and lead the future of the church with their bicultural experience of living between two worlds and for many, their upward mobility.  However, they have unique and complex cultural and generational issues, which are currently holding them back.

Importantly, there were opportunities to hear stories about these issues, for example, from Sarah Do, Petone Toelei’u and Tim Hai.  They had regard to the difficulty of being culturally diverse, dealing with identity, intergenerational conflict and the strengths and opportunities resulting from being able to see through bicultural lenses. Listening and giving a voice gave validation at the same time as allowing others to learn.

The brilliant Bible studies of Keith Dyer and Mark Brett were contextual and relevant to the issues.  There was a cheer when they taught that God too, is a NESB (non-english speaking background).  Keith outlined the struggles, strengths and accomplishments of ‘Paul, 1.5’ who was living between two worlds and had to cross boundaries.  He was perhaps never accepted as an insider – even being buried outside the gates of Rome.  Mark considered what migration in the Old Testament can teach us.  Migration was not uncommon. He considered issues such as that people were struggling with preservation of culture and how God responds to suffering in the context of migration. 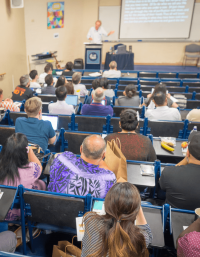 Keynote speakers spoke about their experiences of living between two worlds and how they were mobilised following these.  Khoi Doan’s story was that he came to Australia when he was a young person as a refugee and felt at times overwhelmed because he didn’t belong.  This resulted in him courageously finding a way to ‘Engage’ with Christian life and the community like Jesus did with the women at the well.  Sam Chan’s testimony of his cultural crisis demonstrated that God is always working even when we don’t notice it and that God can use what we learn to prepare us for greater things. He did this in Moses, who was also living between two worlds. Charlene Del Santos and Meewon Yang spoke about the challenges and joys of being not only culturally diverse but also women in ministry.  Thanks to Mark Brett and David Turnbull for providing theological responses.

There were 15 workshops from people who had travelled from as far as New Zealand, Northern Territory, Adelaide, and from many of the BUV which wrestled with the issues. They covered topics relevant to the culturally diverse Next Generation and multicultural church, mentoring, identity, church models, bible activities, cultural intelligence, mission, University ministry and healing. New ideas were delivered and generated.

Culture was celebrated throughout the conference – what a relief for people to be truly accepted for who they were. The Korean, Vietnamese and Burmese food was plentiful.  On the Saturday night, Ka Chin Baptist Church performed their traditional dancing and The Terminal sang Islander style and did the Haka. 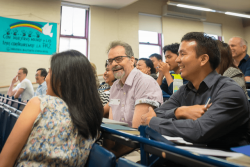 The conference has communicated that the culturally diverse Next Generation leaders are important to the BUV and to the kingdom by making it all about them for the first time.  It has given them a voice when they are often powerless and on the margins.  It has allowed people to consider and respond to difficult issues.  It has given them support and allowed people to network with others who are going through the same things.  The teaching and research was contextual, ground breaking and innovative.  There was an atmosphere of acceptance and belonging.  The contribution of Ignite Leaders 2017 is significant because there is some urgency to find the answers to the complex problems in order for the culturally diverse Next Generation to progress in their faith and ministry.

Please mark your diaries for Ignite ’18 on 6 and 7 July 2018, where the youth and young adults (year 7-University) will gather.