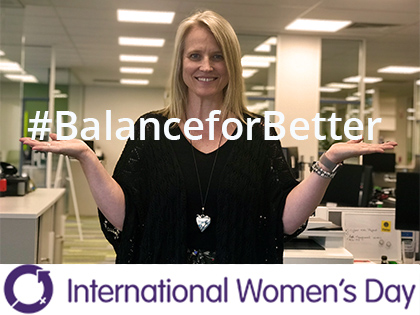 The International Women’s Day is celebrated around the world on 8th of March and is a day to reflect on how far we have come and how far we still have to go to truly achieve gender equality. This year’s theme is #BalanceforBetter and we’ve invited women leaders here at the BUV to share with you their thoughts to better the balance and better the world.

Week 1: You can’t be what you can’t see
By Kimberly Smith
Generations & Emerging Leaders Pastor
The Sydney Opera House’s “All About Women” campaign released a video with the hashtag “Seeing is believing”. In it, 3 girls reflected on what they wanted to be when they grew up. Their thoughts? A helicopter doctor, a marine biologist and an author. When asked to list their inspirations, or the people whose work they knew of in their field of interest, all of them listed males. One of the girls said, “I don’t think it’s a job a woman would be interested in.” completely oblivious to the paradoxical nature of her comment. Although she wanted to be a helicopter doctor, what she’d observed told her that females, as a general rule, wouldn’t.

They were then each given the opportunity to meet a woman who was employed in each of those fields. One of them exclaimed “I didn’t know women could do this for a job!” Another swooned, “Now I’ve met a girl one, like, it’s just a dream!” The power of those encounters to radically alter the trajectory of dreaming and pursuit for those young girls was palpable.

You can’t be what you can’t see.

The reality for girls considering certain spheres of study or career engagement is that they look amongst the elite (or at least those with profile or prominence) and don’t see people like them. As the balance slowly continues to correct, many girls will process a sense of interest, passion and even gifting or calling to expressions of ministry or career engagement in the void of exposure to female role models or examples.

In light of this, restoring the balance looks like championing women publicly. It looks like sharing their stories and sharing the platform. It requires intentionality to affirm gifts, skills, capacities and areas of speciality in younger women as being open for them to explore even if they haven’t yet seen a woman operating in that space. When there are no females present within your context it’s looking outside to see who could be invited in to demonstrate to the broader group the potential for women to be active in those areas of leadership, communication, serving or decision-making. It’s about women boldly holding their place and living out their calling with a mindfulness to who is watching; who is needing to see.

As I move around the state and connect with Generational ministries in our churches I see this theme strongly valued and increasingly demonstrated. Amongst our Generations Pastors and Leaders there is a strong awareness of the fact that a well-developed and articulated desire to see young women flourish in ministry and leadership must be supported by demonstration of this in action. I love being invited to preach into ministries where they are yet to develop female preachers or to lead into spaces where my very presence as a woman in leadership might unlock or empower a young woman to embrace what God is already stirring in their heart.

The video ends, “When I’m older, those little girls will have someone to look up to … because that someone is going to be me.