Ramadan is a great time for Christians to reach out to Muslims and to make and renew friendships. Fasting is one of the five pillars of Islam, and during Ramadan, Muslims who are able to do not drink or eat between dawn and dusk. (Pregnant women, children who have not reached puberty, the ill, elderly, and travellers should not fast.) But after dusk, families and communities come together for joyous Iftar meals. Many mosques organise community Iftars where the wider community is invited. If you love your Muslim neighbour as yourself, then you will want to make friends with Muslims, and this is a great opportunity.

Ten years ago people from Westgate Baptist Community began attending Iftar meals at a Sunni mosque in Sunshine. Leaders from the mosque reciprocated, faithfully turning up at Westgate every Christmas and Easter. We have become like relatives who do not meet often, but who know the connection is there. It is a connection that is important for Muslims, as we have learned.

Last Christmas one of the leaders came to Westgate with a small group of young people. Hamdi told us after news that would be terrorists had planned an attack on St Paul’s Anglican Cathedral, the youth were worried about a backlash against Muslims. “I brought them here today,’ Hamdi told us, ‘because I want them to know this is a place where they will always be welcome.’

A local Indonesian mosque invited us to their first community Iftar, another happy event. They told us they hoped they would not have to wait until Ramadan next year to meet again.

But there is more to Christian witness than just turning up for a free meal – though that can be very important. Sawm-al-Ramadan, fasting during Ramadan, is one of the five pillars of Islam. An equally important but lesser known pillar of Islam is zakat, giving charity to the poor and needy during the holy month. Indeed one of the reasons Muslims are urged to fast during Ramadan is so they experience hunger, and feel empathy with those who do not have enough to eat.

In 2017 we have been making friends with a Shi’a Muslim community. Our youth have joined their youth nights, and a group from their congregation came to a multicultural service at Westgate. Jesus is an important figure in Shi’a Islam, and while they are keen for Christians to hear about the Shi’a perspective on Jesus, they are equally interested to hear about Jesus from Christians.

So when we learned that our Shi’a friends would be collecting zakat donations of food during Ramadan for the Asylum Seekers Resource Centre, we decided to join them. The Asylum Seekers Resource Centre food bank provides food relief for asylum seekers of all nationalities and religious backgrounds. Our English-speaking congregation has a strong record of helping refugees, and were happy to be involved. Our Karen-speaking congregation have been refugees. They know what it is like to be hungry, and were even more happy to help. 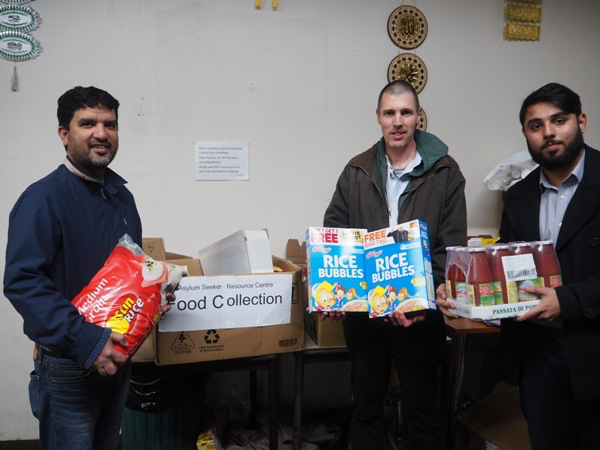 We collected food over two Sundays, and last week we filled a van with the food we had collected and drove it to the Shi’a community centre in St Albans.

We heard many times at these events that ordinary Muslims welcome relationships with Christians, and this expectation starts with the Qur’an.

When the early Muslim community faced persecution the Prophet Muhammad sent three hundred of his followers to Ethiopia, where they were sheltered by the Christian King. These Muslim refugees declared that ‘Christians were the best of neighbours’.

Of course, there are both Muslims and Christians who see each other as the enemy, who will ignore or try to explain away these passages. But most Muslims welcome friendship with Christians, and these passages give them a scriptural basis for the friendship.

From the Christian side, when Jesus sent out his disciples he told them to expect to meet people of peace, and accept their hospitality. There are many Muslims who are ‘people of peace’ who want to build friendships with Christians. When we invited the leader of the Shi’a community to our multicultural service, he said five or six people might come. Thirty turned up, and they stayed for lunch.

Joining Muslims in ‘doing good deeds’ should also not be a problem for Christians: when Jesus was asked by a Jewish religious teacher who his neighbour was, Jesus responded by telling a story praising a good Samaritan.

Jesus tells us, ‘Blessed are the peacemakers, for they will be called the children of God.’ At a time when relations between Muslims and non-Muslims is a global issue, to build relationships with Muslims is to follow the way of Jesus and make peace.