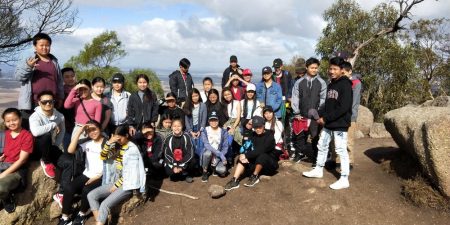 Before Easter a group of 30 young Karen and Karenni Baptists and Catholics went on a one-day pilgrimage together.

Before he was arrested, Jesus prayed that his followers would be one. Two thousand years, and hundreds of Christian denominations later, Christian unity seems far away. Christian missionaries arrived in Burma (Myanmar) more than a hundred years ago when Catholics and Protestants regarded each other as heretics, and different Protestant denominations had an only slightly higher opinion of each other. The Catholic, Baptist and several other denominations now cooperate through the Myanmar Council of Churches, but at a grassroots level attitudes are often unchanged. Christians sometimes treat other denominations – and refer to them – as different religions. The divisions between Christians hurts Christian mission. A Karen Buddhist monk once asked me why it was that at Buddhist festivals monks from different monasteries would gather together, but at Christmas and Easter pastors lead worship in separate churches.

In addition to the denominational differences, churches are divided by ethnicity as well. While Catholic and Anglicans in Burma have national bodies, Chin, Karen and Kachin Baptists have separate organisations. Neither do these differences magically disappear when Christians from Burma arrive in Australia. When 30 Karen Baptists and Karen and Karenni Catholics gathered in the You Yangs National Park, it was a group of youth who rarely meet and never worship together.

The Karen Baptist youth mainly came from Werribee Karen Baptist Church, while the Catholic youth were led by Father William Matthews, a Burmese-background and come from Sunshine Catholic Parish.

The group started with icebreaker activities to get the different groups talking to each other. The group then walked up Flinders Peak. After taking the mandatory selfies and group photo, we gathered in a circle on a granite outcrop and Father William opened in prayer. We then read a psalm about God’s creation and had gospel readings about Jesus being tempted in the wilderness and the transfiguration on top of the mountain. Christians read these psalms and passages from gospels all the time – but not usually on top of a mountain. Hearing them in the bush was a new and different experience. 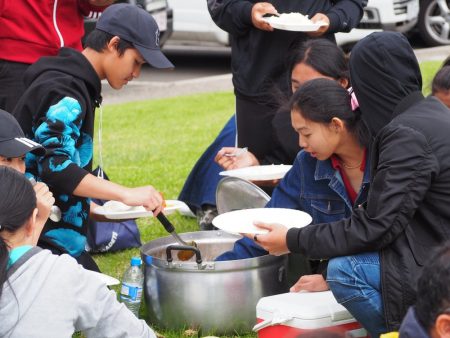 From the You Yangs we drove to Eastern Beach at Geelong. Here we read another psalm and read about Jesus calling his disciples by the sea and calming the storm. The weather was cool and we got off the beach to eat lunch. Lunch was rice and pots of spicy Karen and Karenni curries.

From the beach we drove to Holy Spirit Church, a beautiful Spanish-style church in a quiet Geelong suburb. Father William welcomed the group to the church and spoke about he had visited Baptist churches and learned from the experience, and said that Baptists could also learn from visiting a Catholic church.  Like most Catholic churches it has the Stations of the Cross, a series of fourteen paintings depicting Christ’s arrest, trial, walk to Golgotha, crucifixion and burial. We walked around the church, standing in front of each painting with the youth taking turns reading prayers. “We adore you O Christ and we bless you, for by your Holy Cross you have redeemed the world…” Praying the Stations of the Cross was particularly appropriate leading up to Easter. 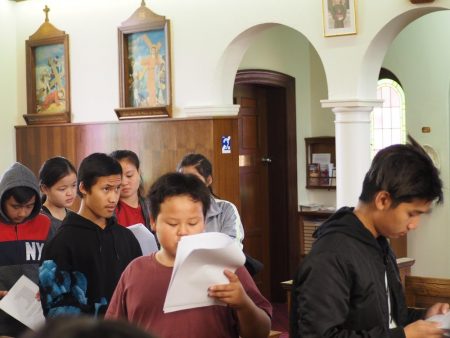 Diana Taw, a youth leader from Werribee Karen Baptist Church closed in prayer, and we returned to Melbourne.

“It was great,” Diana said about the pilgrimage, “I loved it when we were reading the bible on top of the rock and on the beach. Next time when we read that we should read louder. I loved the Stations of the Cross because it reminds us of what Jesus did for us and the sacrifice he made for us. I feel like all Christians should do the Stations of the Cross.”