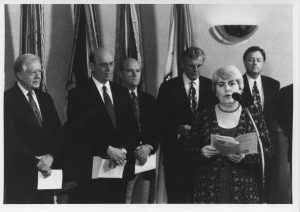 Rev Ruth Sampson was a firecracker. Fiercely intelligent, deeply religious, and devoutly attuned to the needs of others, she shattered a glass ceiling or two as she blazed through life.

And then there are the probable firsts, of which I can’t be absolutely sure, such as being the first pregnant woman to preach at Box Hill Baptist Church, the first Australian woman to be called as a minister to a church in the United States, the first woman to Chair the Baptist World Alliance Resolutions Committee.

And finally, there are those mediocre firsts, those mundane yet potent personal firsts that underpinned her more historic achievements: the first time she publicly disagreed with her husband whilst being his lecturer at a theological college, the first time she was told “theology is a serious matter, not to be undertaken by bored housewives” when applying to theological college, the first time watching her husband mistakenly taken to be the Reverend Sampson, and the first time presenting a human rights award to a former US President (Jimmy Carter) as Chair of the Baptist World Alliance Human Rights Commission (pictured).

My own experience as a girl-child tied to her apron strings is one of hurtling past these firsts and being catapulted into a world in which I assumed my actions would not be impeded, my ambitions not quashed, and my contributions never questioned as a result of my gender. Unlike my mother, I never felt I was defying convention or disrupting society by taking on leadership roles in my work or my church. In the world I inhabit, ‘Women in Leadership’ is an echo of my childhood. Like me, a lot of the world has moved on in the last forty years since. The children of today have grown up with a female Prime Minister, a female Governor General, and a female President of the Baptist Union. And, of course, there’s always the Queen.

Mum’s life may have been cut short by the brutalities of an unwelcome illness, but her vision of hope and reconciliation never diminished. She lived a full life: she was proud of staying true to God’s calling, and humbled to have inspired many women to consider a life of ministry. Let’s honour her life’s work – and that of the many women who worked so hard to break into leadership roles in the church – with a new vision of a Baptist church in which the diversity of our congregations is reflected in our leadership teams.