Visiting scholar to ACU from the United States, Dr Korie Edwards, challenged colleagues from diverse religious organisations to distinguish between ideas of culture, ethnicity and race. Leading scholar of race and religion, Dr Edwards heads a national study of multiracial church pastors called The Religious Leadership and Diversity Project (www.rldp.net) in the USA, the most in-depth, comprehensive project conducted on leaders of multiracial congregations and is also President of the Society for the Scientific Study of Religion. 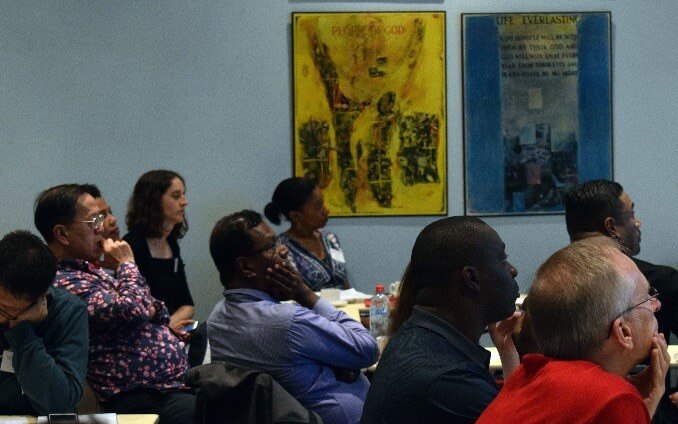 “Australia is a multicultural nation, and has among the highest proportions of multicultural local churches in the world” noted Dr Ruth Powell, Director of NCLS Research.   “In contrast to the USA, where multicultural churches make up an estimated 14% of all churches, in Australia, our latest estimates are that 23% of Australian Christian congregations can be defined as multicultural.  The Catholic Church stands out with around half (51%) of all Australian parishes being multicultural.”    Dr Powell continued, “While cultural diversity in churches is a strength, it is critical that both church leaders and scholars continue to engage with underlying systemic issues, including the importance of diverse leadership.”

The visit, co-hosted by NCLS Research and the Australian Catholic University Institute of Religion and Critical Inquiry, included a research colloquium for academics and researchers, as well as a practical workshop for church leaders. Presentations featured Dr Edwards, Dr Powell and Ms Oneya Okuwobi, visiting PhD student and author of resources on fostering multicultural congregations.

Research event into cultural diversity and churches
The research colloquium on March 14, brought together scholars interested in ethnicity and religion and highlighted 2016 National Church Life Survey datasets available for future analysis.  “Survey forms were provided in 10 different languages and our datasets now have around 80, 000 church attenders born outside of Australia, including 56,000 respondents from non-English-speaking backgrounds,” said Dr Powell. “We hope to stimulate new research among scholars and students in the field of cultural diversity and churches.”

To foster community engagement, a church leader workshop was held on Harmony Day, March 21, and was attended by church leaders from both Catholic and Protestant churches, representing various cultural backgrounds. In addition to keynote addresses about the latest research, participants joined roundtable discussions to explore the role of the ‘safe spaces’ that mono-ethnic churches can create, tips to transition to being a multicultural church, and different models of diverse church life used across denominations.  Rev Charissa Suli, Uniting Church Assembly National Consultant, said “Thank you for organising a much needed event for our Church!”

A multicultural church
It was shown from the 2016 National Church Life Survey results, that more than a third of Australian church attenders (36%) were born overseas, one of the most dramatic increases in the churchgoing population (up from 28% in 2006). Of those born overseas, some 27% of churchgoers were born in a non-English speaking country, which is higher than in the general Australian population (22%).

NCLS Research Director, Dr Ruth Powell said “These latest figures demonstrate that Australian churches, now more than ever, need to be engaged in discussion around how best to be inclusive and empowering of attenders from diverse cultural backgrounds.”

Materials presented at the colloquium and workshop are available on the NCLS Research website http://ncls.org.au/news/cultural-diversity-research-event