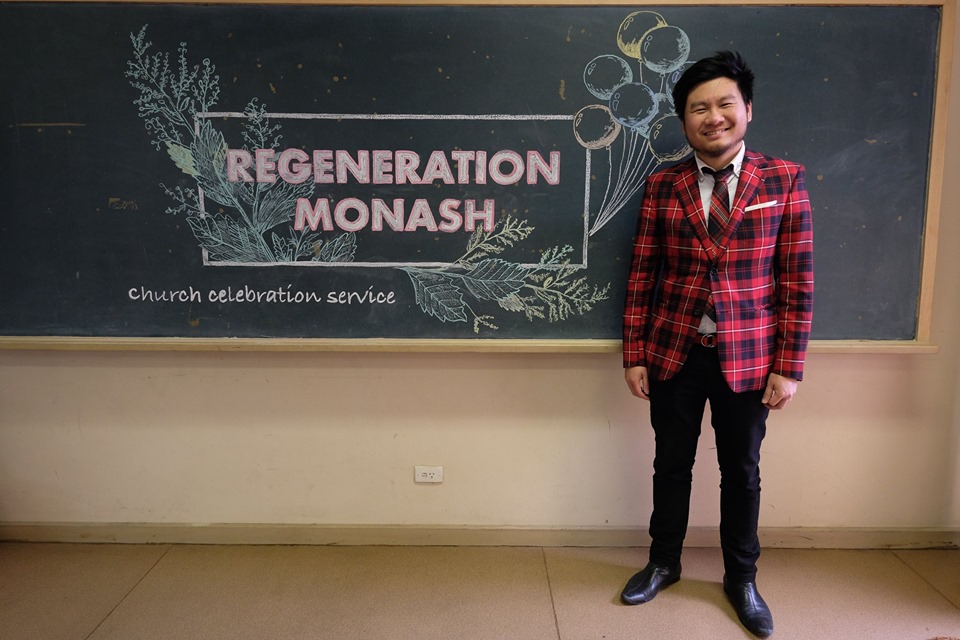 I grew up as a pastor’s kid in Malaysia. While I had seen a lot of my dad in action, I didn’t grow up wanting to be a pastor. When I was 7, I lost my mum to cancer. At a young age, it dawned on me that I was privileged because I’ve heard the gospel – Jesus came to overcome sin and death. And He did it for my mum. I remembered thinking, “If that’s true for mum, then that’s true for me but there are millions of people who do not have this privilege because they have not heard of the good news of Jesus”. That’s when God planted a seed in my heart for evangelism.

When I came to Melbourne to study at Monash University (Peninsula), I was involved in the campus’ international students outreach ministry. Over time I became convinced that church planting is the best way to accomplish the Great Commission.

After graduation, I decided to go back to my Baptist roots and joined Mentone Baptist Church. When I first met the Lead Pastor, Murray Campbell, I said: “Hello, my name is Stephen and I want to be a church planter!” He graciously took me under his wing and became my mentor as I commenced my studies in Master of Divinity at Ridley College. I also contacted City to City to do a church planter assessment and intensive. I knew that the assessment by my sending church’s leaders, peers and the congregation is an important affirmation to my calling.

By 2014, I was 28 years old, full of energy and excitement for church planting. I sought God for direction regarding what kind of church to plant and where. God then challenged me at a church planting conference, to plant a church to reach the many migrants that were coming to Australia. Pastor Murray Campbell was also passionate about reaching the students of Monash University (Clayton) and so, we decided to combine both our visions and plant Regeneration Church. As a migrant and former international student at Monash myself, I felt particularly equipped and called for this task.

With the support of Mentone Baptist Church and some students from Monash University, I was able to put together a church planting core team. We also received support from the BUV and City to City.

Initially, I wanted to be a chaplain for Monash and to plant a church on the Clayton campus. Our team worked hard and jumped through hoops and just as we were about to launch, the University’s management knocked us back and rejected our church. I was devastated and asked God: “How can we gather people if we don’t have a worship space?”

Then, God reminded me that He is in control and in His perfect timing (not mine), He answered my prayer! Through my personal network, I met Rev Jeremy Morgan, a minister from an Anglican Church that is within walking distance from the Monash Clayton campus. He heard our story and offered a space for us to use. God is good!

In 2017, we launched Regeneration Church and held our service regularly at the Anglican Church. Our vision is to be a gospel centred, transcultural community that welcomes students and migrants from every nation, some of whom have never heard the gospel or met a Christian.

Initially, our congregation was made up of mostly students. God continued to bless our church and our community grew from 25 to 50 within the first year. We started missional communities to reach different pockets of people. We saw several people come to faith in Jesus and we baptised 13 people in the first two years of the church.

By God’s grace, I met Pastor Bill Wheaton from Monash Christian Fellowship through the Clayton Pastors’ prayer network. Pastor Bill was seeking to retire and as Monash Christian Fellowship only had 10-15 people, they were open to combining churches. After six months of discussions and a further three months of combined services, we came to an agreement and merge as one church earlier this year.

We are now Regeneration Church Monash with a mixed congregation of people from a variety of ethnicities, cultures, nationalities and ages, all learning, serving and worshipping as one church!

As we continue to bring the gospel of Jesus to the City of Monash, my vision for our church is to be a sending church that trains people for mission. I believe that if God is calling, anyone can do it. After all, we are all about the Great Commission!