As most of us head for a summer break after our Christmas festivities, we can still provide prayer support for the many outreach activities which happen around Beach Missions over the summer.

Here is a re-cap of one of last summer’s Beach Mission supported by Hawthorn West Baptist.

For a couple of weeks in early January, Scripture Union Family Mission (SUFM) and Theos run a beach mission program in Tidal River, Wilson’s Promontory. I joined them as a leader for the first time, though I had participated in the program for many years as a camper. The program is essentially about loving and serving the kids and their families and spreading the good news of Jesus.  As the team mission statement says: “TRSUFM are volunteers from churches across Victoria who want to care for and serve Prom campers, and to share the good news that God loves you!” Beach mission aims to be a relaxed and enjoyable environment to build relationships with campers and give them an opportunity to learn more about the Gospel.

The team this year included around 70 volunteers from churches around Victoria, with nearly half of the team coming from Hawthorn West Baptist Church. This year had many younger people on the team, with a much larger 18-21 demographic.

The first few days were spent setting up the campsite and spreading the word about the program, including by picking up rubbish around Tidal River in our team t-shirts. Some of the campers thanked us for the effort or asked jokingly that we clean out their caravan as well. 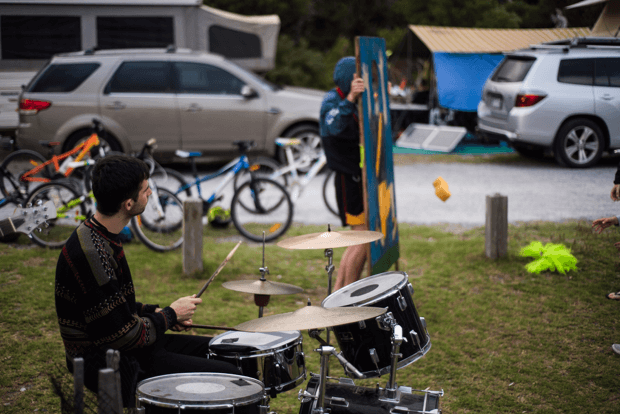 The program began on Sunday night with a family carnival with 100+ kids and their families attending. It included stilts, jaffa hammering, face paint, bubbles, sponge throwing, colouring in and playdough. There was also a man running around in a costume covered in lollies, quickly attracting a horde of kids.

The program for the primary age groups consisted games and a morning concert. The secondary age groups have a less structured program, allowing time to hangout and talk in a more relaxed atmosphere. Each week included a family night and end of week concert to engage the families. The midweek sandcastle competition is often a highlight and attracted 300+ people. This year’s theme was childhood and inspired many amazing creations.

The Tidal Waves group, which I helped lead, had a morning and evening program. The morning included games, pancakes etc. along with a bible study of the Gospel of John. The evening included more games and activities such as amazing race, trivia etc. and testimony from the leaders. The kids had a variety of backgrounds: some were from Christian households and went to church regularly, some go to Catholic schools and others had no experience of church at all. Some had been attending the program since koalas, others were coming for the first time. They were all able to engage with the material and were interested in learning more about the Gospel. For some of the campers Beach Mission is the first experience they have of reading through the Bible and seeing what it says about Jesus. By the end, many of the campers were eager to take bibles home. There was also a question box for whatever questions the campers have about Christianity or life in general. Some of the questions included: what do you think of belief in other/no gods? why is where an unforgivable sin? and why does God allow suffering in the world and many others? It was great to see the kids grappling with such serious issues and keen to learn more. Jono, one of the Tidal Waves leaders, said, he was “encouraged by the team and how Christ centered people are [and] also how receptive the kids are about the Gospel and big questions, evident in kids that have come for multiple years.”

Speaking from my experience attending the program in previous years, the younger age groups were a lot of fun and were a highlight of my camping experience. Entering the older age groups such as El Dads, the program was a really formative experience of fellowship and learning that I found really helpful in my Christian journey.

For the parents it is an opportunity to send their kids to a program they can trust and gives them time to relax. One parent said “we knew it was fun and safe [for our kids]” and he appreciated that “it provided a fun experience and a good witness of Christianity with wholesome role models.” Some of the parents, especially those who’ve been involved for multiple years, often have discussions with the leaders, join the bible study, or come along to the outdoor church service.

The Theos also minister to the 18+ in general. In the morning they cook a free bacon and eggs breakfast. Some people take the food and go, others stay around and talk. The campers are often willing to engage in deep theological discussions.  In the afternoon they run beach games and similar activities. The open mic night had over 100 people in attendance. Some of the Theos were even invited to someone’s campsite for dinner, which indicates how deep a connection they form with people. Dave from the Theos said it was a “good opportunity to meet new people and talk to them about life and to speak into people’s lives.” He appreciates the time to “get away from normal life for a bit a see what God might do.”

As much as it is a service to the campers, Tidal River beach mission is a lot of fun to lead. Free time was spent reading, doing on of the many nearby walks, games on the beach or swimming in the picturesque Norman bay. I appreciated the opportunity to make new friends and learn more about theology from the morning devotions and discussions with other leaders. Jono said he “really enjoyed the worship with a team that are so passionate and joyous.” Aysha, a Koalas leader doing her 9th mission, said beach mission is her “favorite time of year.”  She said it includes “lots of fun times, lots of tiring times – but its worth it all in the end.”