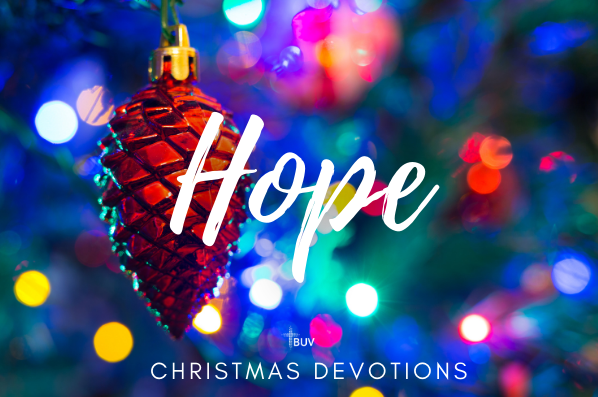 “A thrill of hope, the weary world rejoices, for yonder breaks, a new and glorious morn.” (O Holy Night)

As kids growing up, the anticipation of Christmas morning filled us with hope. There had been signs for weeks that good things were coming. Our lounge room, which was usually quite dark and rarely visited, came to life with a large Christmas tree, with lights flashing that lit up the whole house. At night I could see the lights from my bedroom way down the hall and people walking by outside could see them in the window. A present would appear under the tree, then another, and before long presents were appearing daily. I would look for the ones with my name on it and would imagine what was inside. Hope sprang from my young heart! But it wasn’t just a wishful hope. It was based on what had happened last year, and the year before. I could see the signs. Christmas was coming!

As a seven year old and as Christmas day approached, I felt a thrill of hope! My weary world rejoiced, and that new and glorious morn was coming!

The birth of Christ was long awaited and yet there were signs that brought a thrill of hope. The prophet Isaiah proclaimed, “The people walking in darkness have seen a great light; on those living in the land of the darkness a light has dawned.” People longed for the One who would bring light to the darkness. Just like the Christmas lights lit up our house, people waited expectantly for the One would come to bring light to the world. After Jesus’ birth, the dark sky was illuminated by a star shining so brightly that wise men followed it to Jerusalem. They were hoping to find the One born to be king. When the star stopped where Jesus was, they were overjoyed. They worshipped Jesus and gave him their gifts.

For those wise men, there was a thrill of hope, their weary hearts rejoiced for with Jesus’ birth, a new and glorious morn was born. A child was born king. Of the greatness of his government and peace there would be no end. A King who Isaiah had said would reign with justice and righteousness forever.

Jesus’ life, death and resurrection proved that he was and is the King of Kings. Those who believed and followed him were filled with courage and hope in the face of adversity. Today, we who follow Jesus have hope. It has been a year filled with hardships, suffering and conflict, a year in which many have lost hope. Knowing that Jesus is King and that he still reigning, has been like an anchor for our souls on a stormy sea. Instead of fear we have faith in the King. The coming of Jesus into the world offers us a real and tangible hope that all that is wrong with the world will be made right again. And as we follow Jesus, we offer that same hope to others not only for life today but for the eternal life to come.