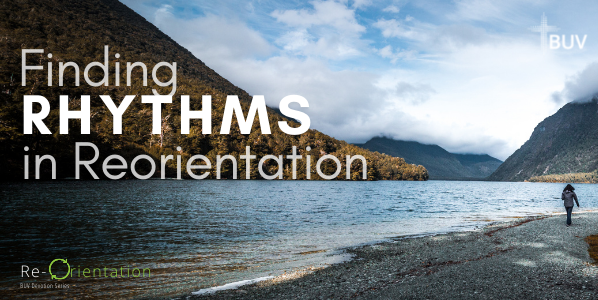 Recently, early one morning, I was taken by surprise when I walked outside and looked up to see two planets, very visible, close to the moon. A quick search online revealed it was Jupiter and Saturn. Not only was I struck with a healthy sense of wonder, I also realised that this event is part of a rhythm that has been occurring for all of time, as we understand it. The rhythms of creation in the heavens had obviously not been disrupted in the same way that the rhythms of our lives have been here on earth over the last 18 months. But disrupted we have been and as a result many of us have been left disoriented.

It’s not an unusual theme. Clearly, life rarely goes according to plan. We orient our lives in one direction and then have to reorient after a disruption. Simple day to day occurrences enforce us to make minor adjustments, other events might mean we have to consciously focus on something ordinarily second nature to us, and then of course there are major events that cause us to have to totally reorient everything about our lives. Many have faced all sorts of things that they didn’t expect they’d have to. A loss of a loved one, a divorce, or a major health challenge. etc, all of which cause us to say, “I was heading this way, an event has left me disoriented, how do I now reorient?”

Psalm 27, for example, starts with the Psalmist having a positive orientation about how the Lord is his light and his salvation. He describes how –

“Though a host encamp against me, my heart will not fear;

Though war arise against me, in spite of this I shall be confident.”

Nothing wrong with proclaiming that.

Then through the rest of the Psalm we’re taken through moments of seeming disorientation when he has clearly had days of trouble and has looked for a place to hide (verse 4). Times when he has desperately cried aloud with his voice (verse 7) in the hope that God will hear him. Times he has feared that God will turn away, hide His face, be angry, abandon or forsake him, in the same way that he may have experienced from his family (verses 8-10). And moments he has sensed his adversaries so close that it seems they are literally breathing down his neck (verse 12).

These are emotions and experiences we can all identify with. As Brueggemann says, “what goes on in the Psalms is peculiarly in touch with what goes on in our life”, and “Everything properly belongs in this conversation of the heart”.

It’s hard to name exactly what causes the Psalmist to reorient, but to close the Psalm off he is once again making confident statements. However, they seem more reflective than the bold opening statements as he believes he will “see the goodness of the Lord in the land of the living”, and as he encourages himself to wait on the Lord, to be strong and let his heart take courage.

I imagine even just the journey of writing the Psalm would be a significant contributor in his reorientation. An opportunity to name and voice our realities and feelings is legitimate before God (according to many examples in Scripture) but it’s also empowering. Spiritual rhythms, just as with the rhythms of creation, are a powerful force. The more we can maintain such things as using our voice in worship and prayer, nurturing our souls in meditation and silence (all of which the Psalmist did), the more likely we’ll have the strength and courage to negotiate a challenging change and reorient toward a new direction.

Another aspect that surprised me those mornings observing the moon and planets and their inspiring display, was a sense of expectation. As Christ followers we can be confident that He is with us through all our rhythms as we orientate, become disorientated and then reorient our way toward His promises.

Abraham and Sarah had looked at and reached beyond that same moon and its mysterious rhythms to imagine counting the stars as they embraced a promise from God to reorient themselves from barrenness to being parents of a nation. And despite the lingering, disorienting hangover of COVID I too wanted to reach for something more knowing that whatever my reach or aim, God’s reach and aim would be even greater. Nothing has changed about His greatness, His goodness or His grace and that whatever I have to do to reorient toward that and ‘let my heart take courage’ is a worthwhile pursuit.