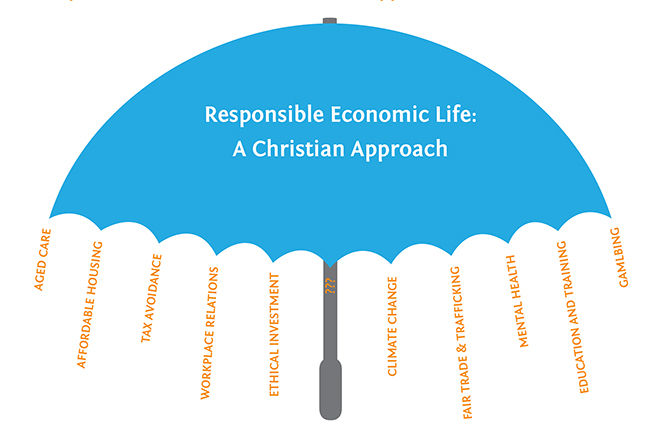 Communities flourish when they care for the wellbeing of all. In Old Testament theology, this flourishing is referred to as “shalom”, which includes every level of personal, social and ecological wellbeing. Christian hope is grounded in the fact that God is ultimately the giver of shalom, but the scriptures also call us to exercise responsibility in every area of life. Our scope of responsibility extends from the most local commitments to family and community to the most comprehensive commitments to the sustainability of the natural world.

The Old Testament prophets were well aware of the tendency for people to protect only their own interests, and even to find religious reasons to do so. But this tendency to avoid the demands of social justice is as short-sighted today as it was in ancient Israel. Jeremiah, for example, satirized people’s narrow obsession with religion, insisting that unless the “widow, orphan and alien” are protected, then everyone will suffer in the end (Jer 7:4-7). In other words, as far as biblical ethics are concerned, quality of life is measured firstly by attending to the needs of the most marginalized.This has immediate implications for how Christians understand economic indicators. Attention to an economy’s Gross Domestic Product (GDP), for example, will be a very poor guide to how the most marginalized people are faring. Even if we might agree that free markets are the most efficient way to grow a GDP, this approach to understanding economic wellbeing would be insufficient from a theological point of view. Unregulated markets tend to undermine stable relationships by treating “human resources” as flexibly as possible, maximizing productivity without regard for the long-term commitments needed to build families and local communities, let alone the natural environment.

While acknowledging the value of markets, and the kinds of freedom that they offer, Christians are called to give priority to the poor and the fragile. Moreover, as St Paul reminds us, we are not just concerned with the marginalized within our own local community: “I do not mean that there should be relief for others and pressure on you, but it is a question of a fair balance between your present abundance and their need, so that their abundance may be for your need, in order that there may be a fair balance” (2 Cor 8:13-14). Paul orientates economic life towards the reciprocity of inter-communal relationships, rather than towards individual freedom and blessing.

Christians may disagree, in good faith, about the extent to which governments can involve themselves in bringing about a fair balance in the distribution of resources, both nationally and internationally. Indeed, no one government (just as no one church) can feed the world by distributing their resources equally across the globe. Nevertheless, it is particularly the role of churches and not-for-profit agencies to press for broader systems of accountability that respect human rights and dignity in various areas like aged care, welfare support, disability services, workplace relations, affordable housing and equitable provision of education. Governments need to be constantly exploring the question of what constitutes a “fair balance”, lest they give licence for people fall back in to the morally narrow focus on blessings for their own community and nation.

Business enterprises should be held accountable for profits derived from inequitable international arrangements, whether in terms of lower salaries in developing countries, or tax arrangements that decrease a company’s contribution to the common good. Accordingly, Christians need to become more intentional and systematic in supporting companies that engage in “ethical investments”, not just avoiding profits in unhealthy industries (armaments, gambling, tobacco, pornography, and so on) but actively promoting best practice in ecologically sensitive industries like mining, energy, information technology, and tourism. Christian mission today will therefore include practices that offer attractive alternatives to consumer ideologies.

With regard to salaries in developing countries, for example, the concern for “fair trade” is a natural expression of Christian concern for justice in international economic relations. But even if particular enterprises can be licensed as “fair trade”, it is important to give careful consideration to the wider economic contexts within which these enterprises are situated. While some products are now routinely considered amenable to fair trade licensing (e.g., in the coffee and chocolate markets), other products are not (e.g., phones, computers, and medicines). Countries that carry unsustainable levels of national debt will not flourish overall, even if particular economic activities achieve best practice in terms of workers’ pay and conditions. Christian witness will necessarily include advocacy of broad economic policies that confront international inequities.

The trans-national activities of churches and their agencies offer unique networking opportunities for insight into the complexities of these matters. Just as local caring agencies can shine a light on the life experience of welfare dependant people in Australia – whether the frail aged, the poor, asylum seekers, and so on – so the international churches and their agencies can inform the conscience of local Christians as we seek to live responsibly before God and shine a light on the impediments to “shalom” at every level, whether personal, social or ecological.

How to visit your Member of Parliament (1.29 MB)

If you are looking for a guide to ethical consumption here is one – go to: www.ethical.org.au It is, Ethical Consumer Guide – Everyday choices that change the world. It is easy to use, and covers pretty well all you might be seeking, by products, category, brand, and company. All this is in a user friendly on-line format.

The rise in thedominance of multinational companies has carried with it both costs and benefits. On the one hand these organisations have been tremendously beneficial. Theyhave created jobs, generated investment, spread technology, delivered newandinnovative products and facilitated an enormous growth in world trade. It is worth noting that trade, has been one of the most significant drivers in helping many nations overcome poverty, including Japan, South Korea and Singapore.

On the other hand, the vastsize andscope of these organisations has meant they are able to wield tremendous power over the global trading system; power which they have often abused. In their scouring of the globe to look for cheaper suppliers, new markets and more favourable taxsystems many multinationals have not paid sufficient attention to the potential damage they can inflict along the way. Some multinationals in their pursuit of profit have even willingly and actively engaged in harmful behaviour.¹