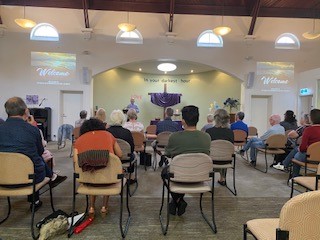 We are so excited to be commissioning and celebrating the partnership among St Kilda Elsternwick Baptist Church, St Kilda Baptist Benevolent Society, the registered charity associated with the church and Baptcare’s Houses of Hope Program. Listing three organisations together like that makes it sound rather complicated but to put it simply, we have come together to provide housing that is affordable or free for asylum seekers in two flats that the church owns.

We want to celebrate that today.

We want to pray for all those involved.

We want to thank God that we have been able to do this one small thing in our attempts to make St Kilda, and indeed Australia a more just and equitable place for all.

A brief reflection on how we got here:

St Kilda Elsternwick Baptist Church has a significant history in providing social/affordable/supported accommodation through Scottsdale and Macasseh House. The Church also owns a block of four flats, all of which were previously rented out commercially.

In late 2017, the Church formed an Asylum Seeker Advocacy Group to advocate for dignity, justice and hospitality for asylum seekers who have come to Australia seeking help. As well as events, letters and petitions, they have been seeking a project to give local expression to this mission.

In 2018, following a seminar with Hal Bissett and a congregational conversation, we formed an Affordable Housing Working Group to consider further steps our church could take in addressing the lack of affordable housing. The group recommended that we use one/some of our church flats in partnership with Baptcare’s Houses of Hope program to provide supported accommodation for asylum seekers. Just as the church prepared to engage this recommendation, Stacey resigned and we decided to pause this initiative.

Over the last 2 years, the St Kilda Baptist Benevolent Society (SKBBS), a registered charity associated with the church and committed to the relieving of poverty in our local area, nominated Fair Share, Community Kitchen and some expression of affordable/social housing as its priorities. While SKBBS has been able to support Fair Share and Community Kitchen, it needed significant additional funding to be able to fulfil its dreams to provide affordable or social housing.

In mid-2020 a generous, unsolicited gift was provided through the benevolent arm of the House of the Gentle Bunyip, a ground-breaking ministry of the Baptist Church in Clifton Hill. Suddenly resources became available.

Soon after that donation the two upstairs units in the church owned flats became available.

Recognising a significant moment, SKBBS undertook substantial research and formed a recommendation to embrace asylum seeker housing in partnership with Baptcare and invited the church to consider entering a 3-way partnership between Baptcare, church and SKBBS.

The church was excited! And a green light was given from the church.

So what formed was a wonderful three way partnership. The Church owns the flats, provides the volunteers/neighbours to the resident asylum seekers should they wish for any neighbourly assistance/friendship. The church leases the flats to Baptcare and SKBBS provides the vast majority of the funding.

And so with the help of you all and the local community we furnished those flats and set them. They are now filled with wonderful people. Some of you may be getting to know them. We have volunteers from our community who under Baptcare’s capable guidance are acting as “neighbours” to our new neighbours as they orient themselves in a new country and community.

This housing is a practical extension of so many things that this church cares about. But more than that I pray this housing will not just be nice social housing but be a home and a so much more to the women and children we are so thankful to have stay there. Amen