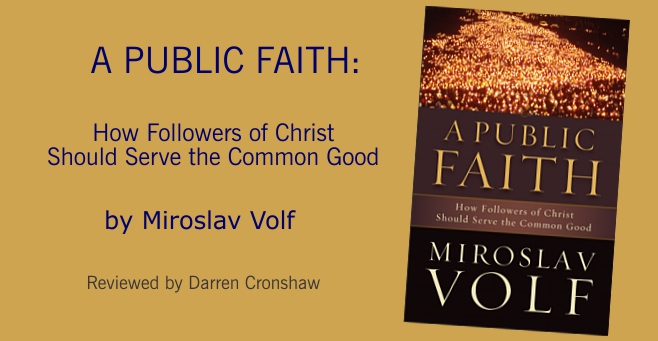 A Public Faith is an award-winning book from one of the world’s most respected theologians – Miroslav Volf who teaches at Yale Divinity School. Volf is a Croatian Christian who grew up in the former communist Yugoslavia, so knows the pressures of religious pluralism and aggressive secularism.

The first part of the book identifies and counters what Volf labels “faith’s malfunctions”. He draws on a broad literature of theology and political pluralism to navigate through and beyond the dichotomy of secularism and theocracy; religious withdrawal and religious totalitarianism; or passive accommodation to culture (idle faith) and expecting total transformation of culture (coercive faith). The secular vision is espoused not just by atheists, but by religious people who fear imposition of other faiths, or those convinced religion is best left as private and personal. Militant religious fundamentalists, such as Sayyid Qutb and his militant Islam or his equivalent in other religions, expect total saturation of public life with one religion. Volf argues both extremes reflect malfunctioning faith. Violent, oppressive and life-destroying faith is a malfunction, as is faith that is apathetic about the condition of the world and does nothing prophetically to help people thrive and to mend the world.

Volf offers an apology, instead, for public theology – that religious people ought to bring into the public square their visions for the good life and human flourishing. They key is to do this humbly and with respect of other faiths and diverse secular views, but not retreating from or downplaying Christian convictions. For example, the cure to Christian violence is not less faith, but more faith – not more blind religious zeal, but stronger and more intelligent commitment to the true essence of Christianity and its culture of peace.

It is a humble and modest agenda of working for transformation that Volf proposes: “Christian communities must learn how to work vigorously for the limited change that is possible, to mourn over persistent and seemingly ineradicable evils, and to celebrate the good wherever it happens and whoever its agents are” (83). This is not about expecting all religions to be the same on one hand, or debating truth claims on the other hand, but inviting all voices to bring their unique traditions to bear on public issues. This may mean putting aside debates about truth claims, and focusing instead on generously living and working cooperatively together for human flourishing and the common good. This is intrinsic to the nature of churches being true to themselves: “The prophetic role of Christian communities – their engagement to mend the world, to foster human flourishing, and to serve the common good – is nothing but their identity projecting itself outward in word and deed” (96). Thus “engaged faith” that Volf unpacks in the second half of the book and which mends the world and serves the common good is the prescription for what he diagnoses in the first part as “faith’s malfunctions”.

The idea that most captured my imagination was to see witness as “sharing wisdom well” in ways that help foster human flourishing and the common good. This is not just a one-way flow, but learning together how to see human flourishing not merely as experiential satisfaction or individual success, but living for something larger including compassion for the poor and marginalised and living peacefully in a world of escalating conflict. All of us in the world need wisdom for these big issues. Volf concludes:

“Jews, Christians, and Muslims (as well as adherents of other world religions) have a common mission in the world. It is not just to roll up their sleeves and collaborate in stemming the relentless and rising tide of human misery, whether that comes in the form of disease, hunger, violated rights, or a polluted environment. The common mission is also to make plausible in contemporary culture that human beings will flourish only when the love of pleasure, a dominant driving force in our culture, gives way to the pleasure of love.” (145)

A Public Faith is a gift to the church and to the world, and an excellent book for activists and public theologians.

A PUBLIC FAITH: How Followers of Christ Should Serve the Common Good, by Miroslav Volf (Grand Rapids: Brazos, 2011)

This review was origin ally published in Australian Journal of Mission Studies 9:2 (December 2015), 78-77.