Baptist Union of Victoria > Book Reviews > Out of My Mind

Out of My Mind 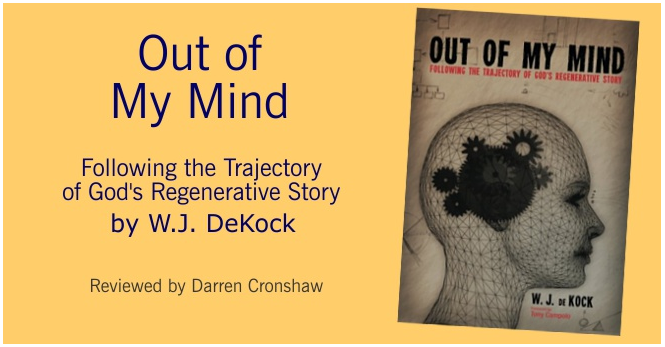 The theologically askew system of South Africa’s apartheid may be easy to diagnose in hindsight or from the outside. But for the white Afrikaner from the inside it was consistent with their theological perspectives of God and Scripture. How does a whole cultural system get to that place, and how do individuals, or a whole country, traverse out of it?

Out of My Mind is a fascinating narrative of one person’s growing discontent and critique of the faith he grew up with, and how certain events led him to leave behind a hierarchical and racist ideology.

Afrikaners saw themselves as a chosen people, like Israel, who had been given a Promised Land. They had left the British Colony and its ideals of equality, found strength in God and fought the Zulu people. Their version of history and the Bible viewed black and coloured people as inferior. To maintain their racial dominance and purity, they restricted voting rights and enforced social segregation. That is the story of Apartheid South Africa.

Wynand de Kock was a South African Pastor and Theological Educator. He earned a Doctor of Theology from the University of South Africa (1990), and pioneered Open Seminary to train leaders in the local church. He came to Australia in 2004 as Vice-Principal of Tabor Victoria, becoming Principal in 2007 until 2013, and is now working with Eastern University and developing Open Seminary. But he grew up and through the history of apartheid and oppression of non-white South Africans.

Out of My Mind narrates a deeply personal memoir of theological pilgrimage from a constrained theology of ethnocentric pride to a theology that is generative and generous. He describes his inbuilt fear of black people as a child but also the blatant injustices he witnessed in his local street and at the Soweto uprising. At University his views were unsettled by a speech from Archbishop Desmond Tutu. During Clinical Pastoral Education at Seminary in America, his implicit racism was challenged by his roommates and a sick little black boy. With his wife Marian, he felt called back to South Africa to be part of racial reconciliation.

He pastored a “gray” church, including coloured people, and directed a ministry to street kids and included them in what became one of the first integrated churches in their denomination. As the denomination had four churches for four people groups, a very practical solution, he questioned what theology underpinned those ecclesial patterns. For a time he served in the Armed Forces, but then became a conscientious objector, seen as a crime for which he was prepared to face imprisonment. As F W de Klerk and Nelson Mandela negotiated the end to apartheid and a new form of government, de Kock worked as Dean with a non-white Principal. He chose forms of service that led to freedom rather than career advancement. Along this vocational journey, De Kock starts to realise how his mind had been colonized by apartheid’s theology. He saw instead an alternate story, became comfortable with questions and doubts, and realised God is not just a stern moral judge or cold distant God but a welcoming and hospitable – even laughing and dancing – God. De Kock’s faith came out of beliefs in his mind into his heart and actions too, as he discovered a new way of being and envisioned God in fresh Trinitarian ways “joining the dance”.

As well as its auto-ethnographic richness, the book outlines De Kock’s theological method as it developed. This is the method he now teaches in Open Seminary. First, he identifies “emerging questions” from our contexts. He asserts we learn more from identifying questions and searching for answers. Questioning sacred beliefs is part of fostering a vibrant and living faith. He urges theologians to help people find meaning for themselves, rather than a close-minded system that does not allow freedom to question which leads to dogmatism as theory rather than vibrant belief and pragmatism rather than thoughtful action. And he counsels us beyond unreasonable certainty to also be open to stages and times of doubt.

Second, he urges engaging with the generative tradition of the Story we are invited into. De Kock implies it is important to identify and discern whether the framing story for our faith and church life is generative and generous, or binding and oppressive. Third, he encourages readers to explore beliefs that transform as we follow Jesus through the liminality of the “already and not yet” of the current time, resisting and overcoming the racism and sexism of the de-generative existence of life after the fall and before God’s regenerative influence. Fourth, he urges us toward purposeful action that creates space for life and cooperates with God’s regeneration of the world. The result of good theology, therefore, is not just right thinking but right behaviour and actions. And on the other hand, good theology is generated not through analytic distance and objectivity but from engaged action. The best theology is not just about what to believe in general terms, but moving beyond a preoccupation with what we think (getting “out of my mind”) and connecting with what we really believe and would stake our lives on.

This is where Out of My Mind is ground-breaking theology. When we can tend to want to know about God rather than wanting to know God personally, De Kock reminds us that the good news of the Bible is that God is not a distant, angry and stern God, but a good and inviting, hospitable God who invites us to join with God and generate a new story.

When contemporary church life narrows faith down to a consumer mentality of “What’s In It For Me”, De Kock reminds us that church should pioneer a new social order that exists for others. Church is for women and men, all ages, all abilities, all stages of faith or no faith, and especially all cultures and ethnicities – together and not in a segregated pragmatic demarcation that fails to reflect the radical inclusion of the Kingdom of God.

No book can cover everything, but I thought Out of My Mind could have benefited from interaction with Nelson Mandela’s Long Walk to Freedom (1994) and there was no 2012-2013 literature among the references. Moreover, the writer has lived and worked in Australia for a decade now, and I was curious how he applies his theological method and social analysis to the Australian context. There is an interesting reference to some of his student’s work, but I sense there is more generative possibilities from De Kock’s work and teaching in Australia, and how he might apply his theological analysis to Australian justice issues. Perhaps those are opportune topics for another book.

Out of My Mind brings together honest autoethnography, perceptive psychology, sensitive historical analysis and insightful biblical commentary. It is a page tuner of a book that I finished in a day, and then returned to read and digest again. His writing has implications for pastoral ministry, theological education and holistic mission in contexts of political and racist oppression. I recommend it as an excellent book for activists and pastors, and teachers and students of theology and mission.