The Witness of Religion in an Age of Fear 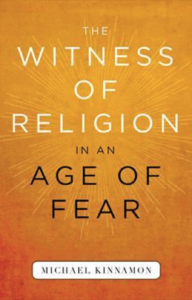 It is easy to see Western societies as sick with fear and anxiety. We fear the unrelenting changes that face us. We are anxious about the future and whether we have enough resources to deal with surprises. Certain politicians in most Western countries foster fear to galvanise their positions on national security and border control. The nature of our age of fear and what drives that is the theme of a broad range of literature. Michael Kinnamon introduces this diagnostic literature, which is helpful in itself. But the central contribution of his book, The Witness of Religion in an Age of Fear, is its appeal to religious communities to explore and respond to a fear-based society.

Kinnamon is a widely respected ecumenical leader, having served as General Secretary of the National Council of Churches in the US and in World Council of Churches and Academic appointments. He is also a strong advocate for interfaith dialogue and cooperation. In a society saturated with fear, Kinnamon appeals for people of different faiths to draw on their traditions about responding to fear and together point in alternative directions.

Kinnamon’s appeal is to identify what is appropriate to fear, but then also to put fear in its proper perspective. He acknowledges that there are things to fear – domestic terrorism, a deteriorating environment, civil conflict, violence against minorities, and overwhelming poverty. Yet much fear is escalated out of proportion and manipulated for political or other ends, such as when fears about security cause civil rights to be compromised, or when fears for preserving personal property lead us to reject hospitality. He advocates for religious renewal to be an antidote to fear-based responses to social ills, ethnic conflict and international tensions. Among his most helpful prophetic challenges is a warning to identify the true source and fuel of our fears, for example:

Kinnamon draws on his own Judeo-Christian heritage in exegeting Jewish and Christian responses to fear. He appeals to an ethic of inclusion and hospitality based on the character of a generous and self-giving God. And he celebrates the appeal of Martin Luther King Jnr’s appeal to face “the poisonous disease of fear” with love and mutuality, as articulate din his sermon on peace: “We are all caught in an inescapable network of mutuality, tied in a single garment of destiny. Whatever affects ne directly affects all indirectly.” (p.45).

He also discusses Islamic, Buddhist and Hindu teachings related to fear, and extols the virtue of their ethics for their own religious communities and for people of others faiths or none to learn from.

He offers a case study of the Israeli-Palestinian conflict, a context of complex turmoil and fear saturation leading to violence and a literal “Separation Barrier” wall. The idea of the wall arose from an obsession with security and protection form “the other”, but the separation and mistrust it fosters has only reinforced the insecurity and tensions of the conflict. This is a lesson perhaps for others who want to build walls and fences. We would be better to learn from the culture of hope that led to the fall of the Berlin Wall in 1989. Unfortunately, there are many more contemporary voices now calling for walls that separate us from competitors and immigrants and potential terrorists.

The culmination of Kinnamon’s argument is that religious communities can offer common witness against misguided fears. A concluding chapter offers recommendations for how practically to do this. Communities can teach what their tradition says about fear, invite people to transparently share their fears, dialogue with people of other communities and faiths, welcome strangers and speak against blatant fear-mongering. People of faith can pray with one another. We can elevate hope and thus instead of anticipating danger we anticipate fulfilment of a positive future. And we can celebrate and foster interdependence.

This is a useful and accessible book that encompasses sociological and theological analysis of the fears that drive much of the political agenda of Western politics, and the potential and needed response of religious communities.

This review was originally published in International Journal of Public Theology 11 (2017), 508–509.