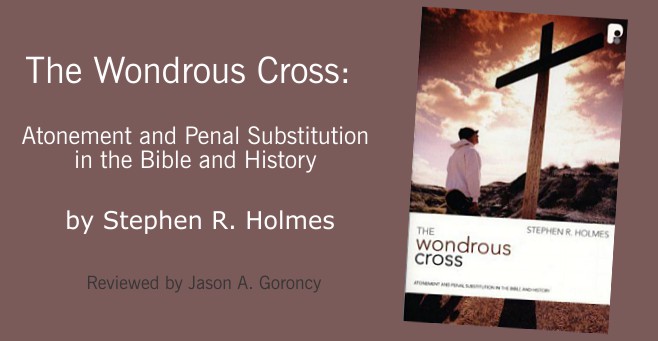 Atonement and Penal Substitution in the Bible and History
By Stephen R. Holmes
Reviews By Jason A. Goroncy (Whitley College)

It seems that not too many theologians feel just as comfortable writing about the Hebrew prophets Isaiah and Jonah as they do Anselm, Thomas Aquinas, Doctor Who, Søren Kierkegaard and Matt Redman. Then again, Steve Holmes, a Baptist theologian based in St Andrews Scotland, is a particularly gifted theologian.

Holmes’ book, The Wondrous Cross: Atonement and Penal Substitution in the Bible and History, has one central thesis: that to speak about the cross – which we must – in a way that is faithful to the biblical witness requires harnessing a broad range of metaphors that the Bible and the best of the theological tradition employs to bear witness to the reality of what God has done in Christ. Those already conversant with Colin Gunton’s brilliant book The Actuality of Atonement: A Study of Metaphor, Rationality and the Christian Tradition will already be acquainted with where Steve is coming from, and perhaps where he is going. He was, after all, Gunton’s student.

Holmes begins by reminding us that ‘Christians have always been more concerned to stand under the Cross than to understand it’ (p. 1), before turning in Chapter Two to the Holy Scriptures, to where ‘Christian theology, if it to be adequately Christian, must always begin and end’ (p. 14). In just 14 pages, Holmes introduces his readers to the place and use of typology in biblical literature, and then surveys the key material from the Hebrew Bible, ‘pictures’ that inform our theologies of reconciliation: principally, for Holmes, sacrifice, but also justice, servanthood, wholeness, healing, and representation.

In Chapter Three, Holmes attends to the Second Testament’s metaphors of at-one-ment – sacrifice, victory, ransom, reconciliation, revelation, new covenant, justification, healing, and salvation. He reminds us afresh that ‘the best way to think about the cross is to use many, complementary, models or stories of salvation that hint at and point towards the indescribable truth at the heart of the matter. It seems clear that this is what the New Testament writers did’ (p. 41). Some readers may expect more from these two chapters but I think given the nature of the book and its intended audience, what Holmes gives us is adequate.

In the following two chapters – Four and Five – Holmes sketches the Christian theological tradition. Articulations and contributions from key representatives – from the early church fathers to the medieval and reformation theologians, from Anabaptists and Anglicans to the early Evangelicals and nineteenth-century liberals, from the twentieth-century neo-orthodox theologians to those theologies of liberation – are perused with a sharp eye. Holmes argues – against those who spill not a little ink trying to force otherwise – that the claim that penal substitutionary atonement is found in the fathers is misplaced and that he can find only ‘one isolated passage in Gregory the Great, but nothing else’ (p. 57), the focus there being principally on ransom and sacrifice motifs. This is not, however, a problem for Holmes: ‘If we understand the various pictures of the atonement to be complementary and (only) partial attempts to grab hold of a bigger truth, … then the history of the early and medieval church will not seem surprising to us’ (p. 58).

Christian theologians and preachers have told many, many ‘stories of salvation’. They have drawn pictures of kings being ransomed and slaves being freed and the sick being healed and guilty prisoners being declared innocent, of human nature being transformed and evil powers being defeated and people being inspired to a new life. The stories have changed through time because culture has changed through time, and different stories communicate the unchanging reality of the gospel to different cultures. At the time of the Reformation, penal substitution became a common and successful way of talking about the cross. Despite some critics, this remained the case for several centuries. Over the past two hundred years, however, several significant criticisms have been raised. Any account of penal substitution today needs to answer three questions:
1. How are all the different ‘stories of salvation’ related?
2. How did penal substitution ever thrive as an idea in early modern culture (i.e., sixteenth to eighteenth centuries)?
3. What, if anything, has changed? (pp. 72–73)

With these questions, Holmes turns in the remaining chapters to explore the ‘what do we do with all these different pictures and stories’ question. ‘How do we decide between them which is right and which is wrong? Indeed do we have to decide between them?’ (pp. 74–75). He proceeds to properly note that ‘every story of salvation works by picturing what Christ did on the cross in terms of one particular facet of human experience, whether it be religious (sacrifice), legal (penal), or whatever. If we want to say that one or another of these theories is just plain right, then we have to say that the atonement, what Christ did for us to save us, really is just one example of some more general part of human life. There are lots of sacrifices in the world, and the death of Jesus is one more. Perhaps more powerful, more lasting, than any of the others, but still, just a sacrifice amongst sacrifices. Or Jesus is one amongst a number of inspiring moral examples that we may find. Again, perhaps the most inspiring, but still, an example of some more general aspect of human life’ (p. 77).

One of the commendable things about this book is Holmes’ concern that the church communicates to its contemporaries that which the various stories of the cross are attempting to make public: ‘We need stories of salvation that are not decomposed, but that make sense to our culture’ (p. 103). Again:

Our account of the atonement must make some sort of sense in whatever modern culture we find ourselves in [sic]. The pictures we draw must use symbols and images that people will recognise; the stories we tell must make sense. For academic theologians this is not quite so important: they can study the culture of Anselm’s day, and so work out how his theory made sense. But for preachers and evangelists – and that means every Christian – it is vital. When announcing the saving death of Jesus to people in ringing tones from a pulpit, or explaining it in hesitant conversation over a coffee, we need to be able to tell stories of salvation that will communicate, that will connect with the people we are talking to.
This might seem a very tall order, but if we accept the need for – and legitimacy of – many metaphors, we do not need to find one theory, one picture, one story, that will meet all these conditions. Instead, we can tell many stories, which between them build up into a cohesive, coherent picture. Some of them will underplay, or miss completely, this or that aspect of the biblical witness; some will be easy to grasp in our culture, others difficult and will require additional explanation. But between them all, we will build up a composite picture of all that Jesus has done, a picture that will begin – but probably only begin – to be adequate to explain the wondrous cross.
The question, then, that I want to put with regard to penal substitution as a way of picturing the atonement is not: ‘Does it answer everything?’ but rather: ‘Does it illuminate some things?’ Does it help, alongside other stories, to build up a picture of the cross? Of course it has weaknesses – every metaphor does – but do its strengths counterbalance its weaknesses? Is there some aspect of the work of Jesus that, in our particular culture, it enables us to speak meaningfully of, some aspect that is missed by most or all of the other things we could say or stories we could tell?
If the answer to these questions is ‘yes’, then penal substitution may – and must – remain as one of our stories of salvation, balanced by others of course, but an important part nonetheless of our witness to the cross. (pp. 85–86)

This is an invitation to bear witness to the work of Christ by harnessing a broad range of metaphors – both biblical and extra-biblical. Therefore, warfare, redemption, judicial, and sacrificial dialects might all be valid, each in their time and place. So too are the dialects of poetry, and those from the social and hard sciences. Although no one group of metaphors can exhaust the Bible’s witness to God’s reconciling work, it is through metaphor that the church has been able to say anything at all about it. We ought not be concerned, therefore, that no one metaphor can translate the profundity of God’s action in Jesus Christ. Christ did not die for a metaphor. Moreover, the dominance of any one metaphor risks distorting the reality which, like conversion itself, carries a totality in it, an eternal crisis, to which nothing in the world is comparable and all metaphor inadequate.

In the final chapter, Holmes suggests that the message of penal substitution remains an important one to teach us about God’s love, about forgiveness and about justice – for both victims and perpetrators. So Holmes:

Penal substitution will, of course, teach us something about justice and guilt. It will teach us first that justice cannot and will not ever be set aside. Not that there can never be forgiveness – of course not – the point of the story is precisely that there can be, and is: while crimes cannot be forgotten, yet at the same time they must also be forgiven. Cases of child abuse, where the abuser has used shaming mechanisms so successfully that none of his victims ever speak; cases of corruption, where the politician has cynically sold favours and hidden her misdeeds well enough never to be discovered; cases of war crimes, where the military officer has callously committed certain deeds, feeling secure in the knowledge that they will not come to light: these are the types of cases and situations where penal substitution becomes an important story to tell.
For the victims in such situations, the story of penal substitution holds the promise that there is justice in this world, even for the worst crimes, or the best-hidden atrocities …
For the perpetrators in these situations, the story of penal substitution holds out the invitation to stop trying to escape their crimes by their own efforts, and to find, if they dare to face up with honesty and repentance to what they have done, full and free forgiveness in Christ. (p. 119)

It is certainly true that the doctrine of penal substitution has very often been articulated in ways that are fundamentally at odds with the God made known in Jesus. And for many theologians, this is cause enough to abandon the idea altogether. Holmes shows us one way why such a move might be premature, how the doctrine can and could be redeemed in the service of Christian speech about the justice of God in Christ. And while not all will be convinced, judicious readers are invited to think through the question – the question posed by the cross; for is not the cross more of a question than an answer? – again.

This book models a time-honoured way of doing theology: begin with the exegesis of Scripture, and then work through the theological tradition with an eye on the church and the world. One of the reasons I welcome this book is because it is the kind of book I can pass onto folk at church who are confused about what the bible and the Christian tradition has said about the cross, and/or who are needing a guide through some the current debates about how we might interpret God’s work in the cross. The book is informed by the pastoral and missional implications of such discussions, and seeks to offer something constructive into them.