Baptist Union of Victoria > Book Reviews > Together for the Common Good

Together for the Common Good 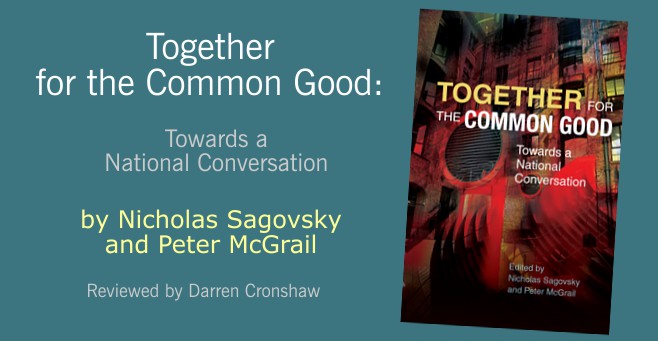 The common good is a phrase of Catholic Social Teaching but of interest to people of all denominations and religions, and none. Together for the Common Good brings together thirteen thinkers and activists – mostly Christian but also Jewish, Muslim and non-religious – to discuss the common good from a variety of perspectives.
By way of background, the book was inspired in particular by two initiatives: firstly, the exemplary collaborative leadership of David Sheppard and Derek Worlock, the Anglican Bishop and Catholic Archbishop in Liverpool in the 1980s and their advocacy for the poor and the common good; and secondly, the UK’s Together for the Common Good project (T4CG; http://togetherforthecommongood.co.uk).
Two chapters of Part 1 explore the language and imagination of the common good. Anna Rowlands underlines the imperative of collaborating together for the common good in a world of economic crisis, global conflict and ecological disasters. It is tested, furthermore, in a nation’s treatment of migrants and asylum seekers. Andrew Bradstock explains that essentially the language of common good helps move us beyond individual success and remind us of dignity of the human person and our interdependence as a community. Borrowing from Jim Wallis, he urges moving beyond keeping up with the Joneses, to instead focusing on making sure the Joneses are okay.
Part 2 offers seven chapters on traditions of the common good; snapshots of leaders and religious groups and their insights about the common good. Historically, Patrick Riordan SJ explains how Aristotle’s philosophy and politics is where the concept began, and argues part of the State’s role is to protect human liberty. Esther Reed advocates for a positive view of wealth that can be used not just for personal gain but for the common good, although we need to prophetically challenge economic inequity. Samuel Burgess celebrates what we can learn from Irish MP Edmund Burke’s championing of civil society and the social contract. Jon Wilson considers how in a culture that inherits Nietzsche’s prediction about the death of God, and the very real decline of religious activity, the church needs to find options for real political engagement other than enforcing its own wishes on the majority.
The volume overall offers insight into Catholic teaching on common good, but three chapters explain the leadership and further potential of other religious groups. Jonathan Chaplin unpacks the diversity of the evangelical movement yet its broad commitment to holistic/integral/incarnational mission with implications for public welfare. Tehmina Kazi celebrates Islamic leadership and involvement in interfaith and grassroots projects, and justice themes at the heart of Islamic faith including istislah ‘to seek the best public interest’ and asabiya ‘social solidarity’. Malcolm Brown examines the Church of England and its liturgical reforms embracing prayers for seeking the common good, and its essential commitment to parish life and churches that build up their local community and work for the good of a more just society.
Part 3 focuses on the market and the common good with four chapters on markets, pluralism, employment policies and Catholic Social Teaching related to markets. These are controversial and delicate matters. Brian Griffiths writes from his banking and political background about how people realise the financial crisis of 2007-8 was largely caused by unrestrained market forces and banking self-interest, and yet markets serve useful purposes in delivering goods and services in a complex global economy of billions of people. Philip Booth explores how the markets can serve the common good, albeit needing certain boundaries or safety nets in a pluralist society, including welfare provision, guaranteed religious freedom and educational systems that teach shared social norms. Another boundary that markets need, as Maurice Glasman discusses for a society committed to the common good, is just and compassionate employment policies that protect especially the young including a living wage. Finally, Clifford Longley asserts the need for framing public policy around the common good and human dignity – the two foundations of Catholic Social Teaching – rather than relying on free market forces and the “trickle down” of prosperity to the poor and struggling
The diverse contents of this volume illuminate various perspectives on the common good. It helped me understand the term and how it is being harnessed in UK religious and political contexts. John Paul II suggested politics, in Aristotelian tradition, is “a prudent concern for the common good” (cited p.182). In a society with growing inequality – including Western countries such as the UK or Australia, we need reminding that wealth is ideally common wealth.
The highest value of the book, however, is showing some of the products and pointing to further potential for change when cross-sector, national conversations are undertaken about what matters and what is needed to create “the sum total of social conditions which allow people, either as groups or as individuals, to reach their fulfilment more fully and more easily” (p187, citing Vatican II’s definition of the common good in Gaudium et spes). It is based in the UK, but is suggestive for what could happen around conversations about leadership for the greater good in other national contexts like my own in Australia.
Together for the Common Good offers insightful reading for anyone interested in community organizing, social justice and political engagement directed toward the common good, especially if motivated by or wanting to understand faith-based perspectives.

This review was originally published in International Journal of Public Theology 9 (2015), 485-487.