Rev Dr San Lian was conferred the Doctor of Philosophy degree on the 30th November 2017 by the University of Divinity.  He is the first person from a Zotung background to have achieved this in Australia – possibly also the first one in the world.

His thesis is titled “Christian–Buddhist Dialogue in Myanmar: A Spirituality of Involvement in Social and Ethical Transformation” and this is the abstract of his work:

This thesis attempts to promote Christian-Buddhist dialogue based on Buddhist notion of social engagement and the Christian vision of the Kingdom of God in the context of the suffering people of Myanmar. Primarily, it aims to address social realities in order to advocate justice, peace and social harmony in Myanmar. 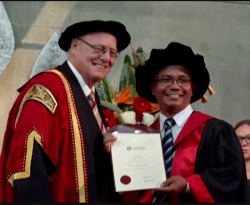 Rev Dr San Lian is currently the Pastor of the Kingsville Zotung Baptist Church and providing much needed leadership and direction to the Zotung community in Melbourne.  His aim in doing the research is to find a way for promoting peace in Myanmar – a country deeply affected by decades of conflict.  This is his dream – as written in his thesis:

This thesis examines the possibility of promoting Christian–Buddhist dialogue in Myanmar, where both Buddhists and Christians (especially those of the Protestant churches) have neglected and avoided interfaith dialogue up to the 21st century. In Myanmar, differences in faith and ethnicity tragically lead to religious marginalisation, violence and ethnic conflict. In this unstable situation, politicians exploit an amalgam of hatred, mistrust and fear rooted in ethnic religiosity, which often fuels the anger of defensive religious leaders. In response, this thesis advocates for the promotion of interfaith dialogue based on socially engaged spirituality for Myanmar people at the grassroots level, which may in turn lead to moral and social transformation.