Shiva and Reza from Iran 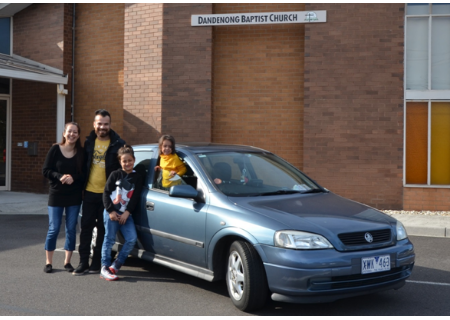 Shiva and Reza arrived in Australia with their two children in July 2013. They left Iran for political reasons, and because Shiva feared she would face persecution once she became a Christian. Her father was Christian and she always believed in Jesus, but in Iran – where she only once laid eyes on a bible – converting was not something to be taken lightly.

Their family was detained on Christmas Island for many months before being granted residency in Australia. Shiva was baptised at Broadmeadows Baptist Church shortly after their arrival in Melbourne. The family have since settled in Dandenong while they await the outcome of their visa reviews.

With the help of Dandenong Baptist Church, Shiva and Reza applied for a car loan from BUV. Their application was successful and they recently purchased a Holden Astra. The car has been hugely helpful to the family, enabling them to drop their children at school, get to and from appointments, do their shopping, and attend English classes.