GT Church, based in Drouin, began meeting together almost exactly 2 years to the day of its first baptism, in November 2020.  With the church gaining momentum, only weeks later, they held their second baptism.

GT (Grace and Truth) Church’s name comes from the verse in John 1:14, ‘The Word became flesh and made his dwelling among us. We have seen his glory, the glory of the one and only Son, who came from the Father, full of grace and truth.’   GT Church Pastor, simply known as Hayno, named the church after hearing a speaker at a conference saying that Grace and Truth are like aeroplane wings – they need to be in balance in order to fly straight.  This resonated with Hayno, and when the missional initiative was ready to take off, it became known as GT Church.

The church is founded upon the biblical principles in Acts 2:42 of teaching of the word, fellowship, breaking of bread and prayer.   GT Church, which has become somewhat of a place for the unchurched or dechurched, meet and eat together on Sunday nights in the Pastor Hayno’s home.

GT Church began as Hayno, a previous Youth Pastor, was continually meeting christians who were either not in any christian fellowship or were disconnected with the church that they were in. “I soon found out that these people are know as the “de-churched” and I started to investigate the possibility of creating a space for these de-churched christians to reconnect with God and each other in christian fellowship – that is to effectively start a missional community or, ‘church’.”  Many of GT Church’s congregation members bring baggage with them  – but Hayno accepts them wherever they are at, with no preconceptions.

Hayno describes the vision that God gave them for the church was to “engage our community for the Gospel by getting involved in our local community rather than the more traditional method of trying to get the community to come to us.”  Sport chaplaincy is one of the ways they are engaging as a church in the local community. Sporting clubs are the hub of the community in a country town and Sport Chaplaincy Australia are a great organisation to be involved with. GTc have two registered chaplains with SCA, one at the Football/Netball club, The Drouin Hawks, and one at the West Gippsland Field Archers. This contact with the clubs has opened the doors for GT Church to bless the local community. They have also become a silver sponsor of the football club.

The third bible verse that the church is founded upon is Hebrews 10:24,25. Spurred on by this verse, Hayno continued to provide opportunities to meet together as a church online this year through the lockdown.

It was during the Zoom meetings that Chloe, 20, first connected with the church.  Her boyfriend, Emil, had been in Hayno’s youth group in his previous role as Youth Pastor at Drouin Baptist Church.  Emil, who had moved to NSW for university, had been connecting into the Zoom church and one Sunday night Chloe, showing courage and curiosity, joined in without Emil.  She connected immediately and Hayno describes feeling like they already knew her. After talking about believers baptism one Sunday night, Chloe  expressed her desire to be baptised.  So as soon as lockdown was officially over, Hayno baptised Chloe in the Tarago river at Picnic Point. 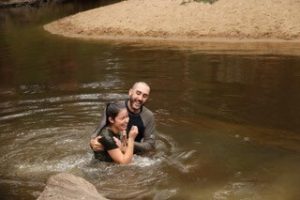 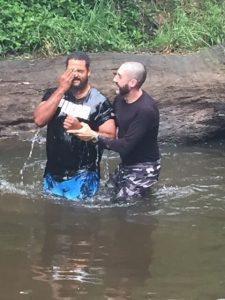 A fortnight later they celebrated their second baptism – Kiarn, who Hayno had known 6 years ago when he was working at Mill Valley Ranch.

It is still early day’s for GT Church. “We are two years in and it feels like we are still very much in the forming stage. We have a group of about 20 committed people who attend our weekly meeting and about another 10 who I would call interested ones, they are not constantly there weekly but are consistent ‘every other’ week.”