One of the great experiences we both had earlier this year was participating in the ‘Asylum Seekers and Refugees’ intensive unit at Whitley College. 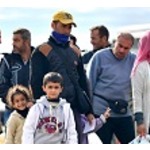 From the first day we were fascinated, informed, challenged, and deeply moved. We met face to face with refugees and asylum seekers themselves as well as a range of professionals who worked directly with them. We gained insights into the complexity of the legal issues relating to asylum seekers directly from a prominent lawyer currently working in the area. The session with a psychologist who works with recently-arrived children gave us invaluable glimpses into the importance of the patience and the listening skills needed to help children and their families deal with the long-term effects of past terrors. We met and heard directly from social workers and chaplains and were privileged to visit one of the BaptCare Sanctuaries. A Sanctuary is a shelter for men waiting to be assessed for a visa, unable to afford both adequate food and shelter, hoping for permission to work in Australia.

As members of the class, we each selected a group of refugees currently living in Australia and researched their particular culture, language, customs and religion. We also investigated the sorts of issues that arise as that group attempts to make a new home in this country and we analysed the roles that churches in different areas can play and indeed are playing in support of asylum seekers.

The unit was an intensive, delivered on four Saturdays spread over some months. This was a real advantage to some who could not have undertaken the unit otherwise. The unit was grounded in Biblical teaching from both Old and New Testaments concerning treatment of those strangers and aliens living in the community. “You shall also love the stranger, for you were strangers in the land of Egypt” (Deut. 10:19 NRSV).

A highlight of the unit was hearing asylum seekers from five quite different countries tell their stories. Most had left their homes in fear of their lives. Escape routes involved refugee camps in neighbouring countries which provided temporary safety for months and sometimes for many years. None felt sorry for themselves, and all expressed gratitude for being safe. Each was concerned about family members left behind and their ongoing health and safety. We started to understand how hard it is to begin a new life when one’s heart is in two countries.

We thank Whitley for the provision of a unit of study with the rare combination of valuable, wide-ranging professional resources combined with direct contact with individuals comprising the topic of study. One simple plea stays with us: “I am not a number. Treat me badly, torture me if you want, but look me in the eye and please, address me as a person.”

Tags:
Baptists on a Mission